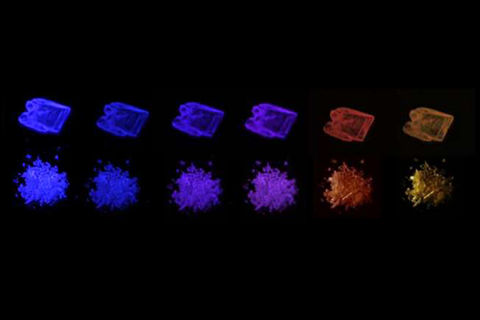 The afterglow of the crystal that changes from purple to orange after illumination with UV light could help fight counterfeiting. Timeframe for the entire sequence 1.1 seconds

A crystal that glows blue but changes colour to purple and then orange within a second could make banknotes more resistant to counterfeiting.

Fluorescence and phosphorescence – a type of delayed fluorescence – make materials glow a single colour. Now, a team of chemists in China has discovered the first single compound that has a colour-changing afterglow. Currently, to get a similar effect, researchers needed to build materials out of several different phosphorescent molecules.

The molecule in question is 4,4′‐bis(N‐carbazolyl)‐1,1′‐biphenyl (CBP), a symmetric, linear aromatic. Under ultraviolet light, it is faint blue in colour. But after the UV light is switched off, it glows blue, changing to purple and then orange before fading.

The effect is caused by thermally activated delayed fluorescence in the blue wavelength range combined with red–orange phosphorescence. While the latter is a property of the individual molecules, the former originates from the aggregation interaction between molecules in the crystal. When the crystal is ground into an amorphous powder, or when the compound is dissolved in a solvent, the afterglow disappears.

In combination with a diphenylanthracene derivative, CBP might make for more secure anti-counterfeiting marks on bank notes and other items that need a security tag. Under UV light, one set of symbols is visible as the anthracene interferes with CBP’s fluorescence. When the UV light is switched off, the anthracene becomes inactive and CBP’s afterglow shows off another, colour-changing set of symbols.