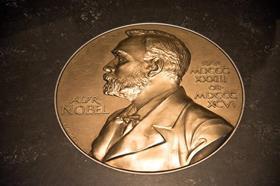 Ahead of next week’s Nobel prize announcements, Thomson Reuters has released its annual forecast of potential winners.

The organisation has named almost 260 potential Nobel prize winners since 2002, by using citation data from its Web of Science platform to identify highly influential researchers. Of these ‘citation laureates’ 39 went on to win a Nobel prize, including the winners of last year’s awards in physics and economics.

The most recent citation laureate to win a Nobel prize in chemistry was Martin Karplus, who shared the award with Michael Levitt and Arieh Warshel in 2013 for ‘the development of multiscale models for complex chemical systems’.

In this year’s projections, Thomson Reuters has selected pioneers in three different areas of chemistry as potential prize winners. They include Japanese scientists Hiroshi Maeda and Yasuhiro Matsumura for the discovery of the enhanced permeability and retention effect of macromolecular drugs, an important finding in the area of cancer therapeutics.

Dennis Lo Yuk Ming of the Chinese University of Hong Kong is suggested as a possible winner for the detection of cell-free foetal DNA in the blood of pregnant mothers, a technique which has had huge implications for non-invasive prenatal testing.

George Church, of Harvard University, US, and Feng Zhang, of the Massachusetts Institute of Technology, US, are also put forward as potential winners for work on the Crispr-Cas9 genome editing tool in mouse and human cells. Last year, Emmanuelle Charpentier and Jennifer Doudna were nominated by Thomson Reuters for the same technique, although the Nobel prize went to Tomas Lindahl, Paul Modrich and Aziz Sancar for ‘mechanistic studies of DNA repair’.

As the excitement builds in the run-up to the Nobel announcements, many online commentators are also making their own predictions. John Goodenough and Stanley Whittigham, key figures in the development of lithium-ion batteries, are among those put forward as potential Nobel winners by blogs The Curious Wavefunction and Everyday Scientist.

The Nobel prize in physiology or medicine will be the first to be announced on 3 October and concluding with the Sveriges Riksbank prize in economic sciences in memory of Alfred Nobel on 10 October. The winner of the Nobel prize in chemistry will be revealed on 5 October.