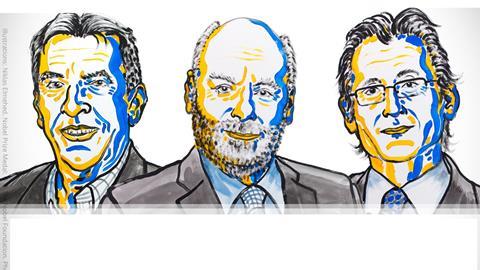 Molecular machines roll in for the 2016 chemistry Nobel

The 2016 Nobel prize in chemistry has been awarded to Jean-Pierre Sauvage, Fraser Stoddart and Ben Feringa for building a world of molecular machines.

From wheels to motors and cars to lifts, this year’s laureates have built a series of machines that are about 1000 times smaller than a human hair. ‘These three laureates … have opened this entire field of molecular machinery,’ said Olof Ramstrom, a member of the Nobel committee for chemistry, upon announcing the prize. ‘They have shown it is possible to make a machine at the molecular scale.’

Richard Feynman first laid down the challenge to construct a molecular machine in his famous lecture, There’s plenty of room at the bottom, in 1959. But little movement had been made in the field until Jean-Pierre Sauvage from the University of Strasbourg, France, unlocked the key to creating a molecular chain in 1983.

Sauvage forged this chain, known as a catenane, by using a copper-complexed ring and two cresent-shaped molecules. His group would go on to create an array of interlocked chains, including a trefoil knot and even a molecular Mjolnir – Thor’s mighty hammer in Norse mythology. More importantly, however, in 1994 Sauvage turned a catenane into a functioning motor, in which one ring rotated around the other.

Fraser Stoddart, from Northwestern University, US, and a member of Chemistry World’s international advisory board, is recognised as one of the first scientists to create a molecular shuttle called a rotaxane. In 1991, Stoddart’s group threaded a hydroquinol ring onto a polyether rod. When the group applied heat to these rotaxanes, the ring moved forward and back along the rod. Stoddart has since gone on to exploit their full potential, synthesising a rotaxane lift and artificial muscle.

Credited with constructing the first molecular motor, Ben Feringa, based at the University of Groningen in the Netherlands and chair of Chemistry World’s editorial board, was able to get an ‘overcrowded’ alkene to spin in one direction by exposing it to UV light and heat. The rotor went on to inspire Feringa to build a nanocar with fully functioning molecular wheels. By 2014, Feringa was able to spin this molecular rotor at 12 million revolutions per second.

‘This year’s Nobel prize in chemistry strikes me as recognition of the value of chemical imagination,’ says Jeremy Berg, editor in chief of Science. Berg explains such molecular motors initially stirred up controversy as scientists weren’t sure whether they could be defined as molecules, given they weren’t held together by covalent bonds. ‘It is a good sign that you have discovered/invented something novel when you create such a controversy.’

‘This is fantastic news and good to see such a core area of chemistry receiving such attention around the world,’ said Royal Society of Chemistry chief executive, Robert Parker. ‘Their inspirational chemistry has caught the imagination of so many people, fascinated by the ability to design functionality into molecules at an incredibly detailed level. Molecular motors are an ideal topic for outreach and getting people interested in chemistry. They give us an insight into the molecular world through a simple idea that everybody can understand – the mechanism of motors.’

Stuart Cantrill, chief editor of Nature Chemistry and a former PhD student of Stoddart’s, is overjoyed that this field has been recognised by the Nobel committee. ‘I think it’s validation that other people think it’s important enough to win this type of prize,’ Cantrill tells Chemistry World. ‘As the years have gone on, people, Ben and Fraser especially, have made little machines that are more capable of more complex tasks and operations – it’s not just simple interlocked molecules anymore, it is little machines that can do things.’

‘Despite all this talk of applications, this area really is a triumph of “pure” science – the field has taken 32 years from Sauvage’s first publication to now,’ says Steve Goldup from the University of Southampton, UK. ‘It may take a couple more years before these systems deliver on their promise but the trajectory is there and really relies on the breakthrough delivered by the fathers of the field.’