Confirmation of buckyballs in the Milky Way 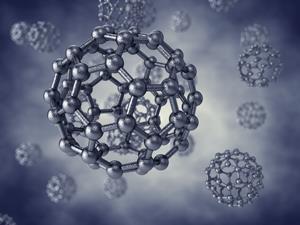 The presence of buckyballs in the Milky Way has been confirmed by scientists who matched the absorption spectra of C60+ ions to two previously unidentified absorption features in spectra of the interstellar medium that were identified over 20 years ago.

In the early 1990s, shortly after the discovery of buckyballs, John Maier and colleagues at the University of Basel in Switzerland, who were specialists in electronic spectroscopy of polyatomic ions, developed a technique to measure the electronic absorption spectrum of C60+ in the condensed phase, using neon to dilute the C60 ions at low temperature.

‘A year later two astrophysicists looked in this region and found diffuse interstellar bands quite near in wavelength,’ says Maier. They suggested these bands – at 9632 Å and 9577 Å – could have been due to C60+ ions, but because the neon matrix used to measure the laboratory spectra caused some distortion, the match was not close enough to prove this unambiguously.

‘It took 20 years for us to develop the appropriate techniques to measure the electronic spectrum of C60+ under the conditions as in space to be able to make a direct one-to-one comparison,’ says Maier. The group synthesised a complex of C60+ and helium which enabled the spectrum to be measured in the gas phase at a temperature of just 5.8K. Their measurements show an almost exact match to the interstellar spectra, with band maxima at 9632.7Å and 9577.5Å.

‘The results show that these two absorption features … are of C60+, and I think that has tremendous implications for the whole of astrochemistry, how molecules are produced from stars via C60 to small carbon chains and then recycled [back] into stars,’ says Maier.

Speaking at a symposium celebrating 30 years since the discovery of buckyballs, Harry Kroto, who shared the 1996 Nobel prize in chemistry for their discovery, described Maier’s group’s work as  ‘the paper of the decade’. Kroto has argued for many years that C60+ is responsible for these interstellar bands, and the confirmation of this will offer insights into the behaviour of fullerenes in interstellar dust, and their role in the formation of planets and stars. ‘This will change everything,’ he said.