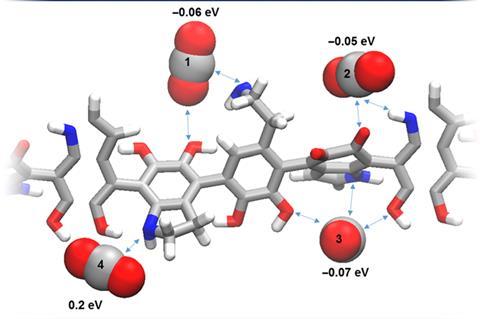 Functional groups within polydopamine drive the reduction of CO2

The conversion of carbon dioxide to useful chemicals such as fuels could potentially close the anthropogenic carbon cycle. Now, researchers have unveiled an efficient, selective and metal-free catalyst for the reaction.

Several electrocatalysts can reduce carbon dioxide to species such as carbon monoxide or formate, but the most efficient and selective of these have been noble metals like silver. Researchers in China recently demonstrated CO2 electroreduction, predominantly to formate, using a catalyst covered with partially oxidized cobalt layers. Their system had an overpotential – the potential required above that thermodynamically necessary – of just 0.24V, meaning not much energy was lost as heat. However, long-term cobalt supplies could be limited. ‘There are not many mines in the world producing cobalt,’ points out Philipp Stadler of Johannes Kepler University Linz in Austria. ‘At present, it might be no problem, but if you just think how much catalyst you would need to recycle megatonnes of carbon dioxide, then you probably see that it is essential to have some alternative technology which is basically sustainable.’

Nature often uses metal-free enzymes, and in the new research Stadler and colleagues used density functional theory to work out that polydopamine – a polymer based on the skin and hair pigment eumelanin – contains amine and carbonyl groups linked by hydrogen bonds that have an energetic affinity for carbon dioxide similar to the metal centres of a traditional catalyst. Previous investigations of such active sites in synthetic electrocatalysis have found that the poor conductivity of hydrogen-bonded pigments impedes electron transport, constraining reaction rates and requiring high overpotentials. To address this problem, the team deposited the dopamine monomer onto conductive carbon felt electrodes in an oxidising environment. This coated the electrodes in a layer of conductive polydopamine – a polymer never synthesised before, with a charge-conjugated backbone. ‘The catalytic functional groups are very tightly bound to the conjugated core,’ explains Stadler, ‘So whenever I start pumping in an electron, I will activate not only the conjugated core but also the catalytic functions.’ 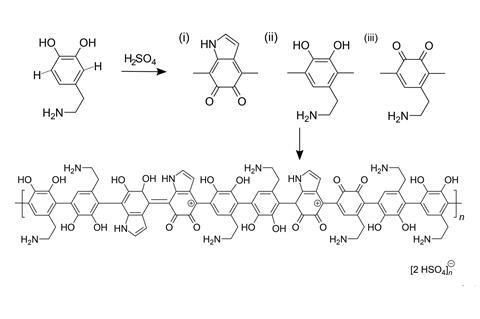 The researchers tested their organic electrodes at reducing carbon dioxide in a mixture of water and acetonitrile. They found that, over a 16-hour run, the system transferred charge with over 80% efficiency into the reduction of carbon dioxide, mainly to formate, and required an overpotential of just 0.21V.

‘Whenever you start tuning your bio-inspired organic system such that it has a lot of these catalytic functional groups on the surface and it can transport electrons, then you can operate on par with state-of-the-art metal catalysis,’ says Stadler. He says they are now looking to reduce the formate further: ’We were thinking of designing an electrode where the polydopamine is combined with enzymes, so that we get a cascade – turning CO2 to formate by polydopamine and formate to methanol or formaldehyde by a second process,’ he explains.

‘I think this is most significant for the electrochemistry that the researchers were able to do,’ says Surya Prakash of the University of Southern California, US. ‘In terms of solving the renewable fuel problem, I don’t think this is such a great contribution. Lots of groups, including my own, have made formic acid as an intermediate, but we need to make something like methanol or even carbon monoxide in good yield.’

Catalytic chemist Edman Tsang of the University of Oxford, UK, agrees, and notes that a bonus of the non-metal catalyst is that it channels electrons far more selectively into the reduction of CO2: ‘With metals, it’s very, very easy to form dihydrogen, and they don’t over this non-metal system.’