The world’s demand for energy, and the resultant carbon dioxide emissions, are drastically changing our climate. UK startup Econic Technologies is developing catalysts that could take some of that CO2 and lock it up in high-performance polymer materials.

Econic’s catalysts allow carbon dioxide to react with a range of epoxides to make polycarbonate materials in which up to 50% of the polymer’s molecular weight (depending on the epoxide structure) is derived from incorporated CO2. The company spun off from Charlotte Williams’ group at Imperial College London in 2011.

While Econic is not the only company developing ways to make such materials, its catalysts are some of the most active and selective available, claims commercial director Rulande Henderson. The product polymer chains contain precisely alternating carbonate and ring-opened epoxide groups, with no ether linkages from direct epoxide-epoxide coupling. ‘So we can incorporate the maximum amount of carbon dioxide into the polymer,’ Henderson adds.

Incorporating CO2 also means less of the more expensive petrochemical-derived epoxide is needed, which has both financial and environmental benefits. ‘For every tonne of CO2 that you incorporate into the polymer, you save a further two tonnes of CO2 in terms of avoided feedstock manufacture,’ says Henderson.

Michael Kember, Econic’s research manager, explains that the catalysts comprise an organic ligand framework around two metal centres. ‘We can use a range of metals, but mostly it’s non-toxic metals like magnesium or zinc,’ he adds. ‘It’s also a homogeneous catalyst, so it dissolves in the epoxide, which is usually a liquid.’

The process for making polycarbonates from CO2 has been known for 40–50 years, Kember says, ‘but it’s only very recently that it’s been worth commercialising. You need a very well-tuned catalyst to make the polycarbonate rather than cyclic carbonates, which are easier to make, but less valuable.’ 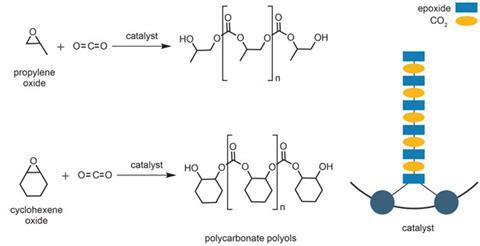 Initially, the company is developing catalysts to produce polyols for incorporation into polyurethanes. ‘These are short-chain polymers between about 400 and 10,000 molecular weight, with hydroxyl functionality on the chain ends,’ says Kember. The polyols are reacted with di-isocyanates to make polyurethanes, which can be used for a variety of applications including foams for mattresses or car seats, or resistant coatings in paints.

Polyurethane makers are already familiar with using epoxides for making polyols, Kember explains, and the processes are similar enough that plants can be retrofitted to incorporate CO2 using Econic’s catalysts, rather than needing to be completely redesigned.

Using highly purified CO2 to make polymers is all very well, says research scientist Emmalina Hollis, but there would be significant added advantages if you could use waste carbon dioxide without having to go through so many purification stages. ‘There are generally a variety of point sources of CO2 in a chemical plant, so if you can use that directly, you can reduce transport and purification costs, and hence make the whole system more efficient.’ 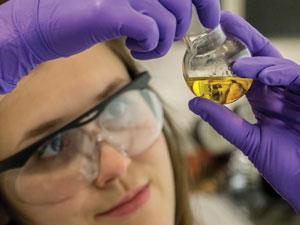 The problem with that is making a catalyst that’s robust enough to deal with the impurities. ‘The CO2 will be “scrubbed” as it comes out of the waste gases, but you’ll still have high levels of water in there and possibly other contaminants,’ Hollis says. With that in mind, the company has been experimenting with samples of real carbon dioxide emissions supplied from the UK’s first carbon capture and storage (CCS) pilot project at a coal-fired power station in Ferrybridge, funded by the Department of Energy and Climate Change. ‘We’ve used cyclohexene oxide with one of our catalysts,’ says Hollis, ‘and the catalyst works the same way, producing the same polymer whether we use pure CO2 or the CO2 from the CCS project.’

Econic is now partnering with polymer manufacturers to further develop the catalysts and demonstrate their use within their plants. ‘We are the only catalyst maker that supplies directly to polymer manufacturers,’ says Henderson, which should allow for wider industry adoption. ‘Other, related technologies have been developed by the polymer manufacturers themselves and are therefore not as readily available to the rest of the market. One would have to license the technology from a direct competitor.’

The company has been working with mentors from Procter & Gamble and Croda, as a result of winning the Royal Society of Chemistry’s 2014 Emerging Technologies competition. ‘They’ve given valuable advice in some specific areas,’ says Henderson, ‘such as regulatory compliance, intellectual property strategy and supply chain management.’