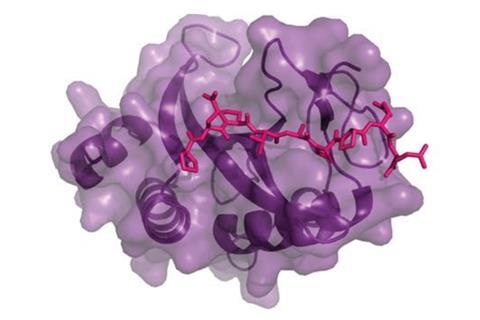 With the help of a cyanobacterium enzyme that cyclises short protein strands, researchers have transformed Escherichia coli into tiny factories that produced a million different macrocyclic proteins – compounds that might be able to tackle diseases such as HIV.

Most small molecule drugs inhibit proteins by binding to their active sites in a ‘lock and key’ fashion. However, two proteins can also interact through physical contact. These protein–protein interactions play a role in certain diseases but are tricky to stop with small drugs.

Macrocycles, with their multiple binding sites, have shown promise for tackling disease-causing protein interactions. However, macrocycles’ size means there are millions of possible derivatives. This means researchers must create large compound libraries for testing against a specific target – a tough task using classic chemical synthesis.

Researchers from the US and the UK created the one million strong macrocycle library by enlisting the help of E. coli’s biosynthesis machinery. Adding a marine bacterial enzyme to E. coli allows them to create double rings out of short protein strands by building intramolecular sulfur bridges. As the strands have random amino acid sequences, this process creates thousands of different bicyclic peptides at once.

One of the macrocycles could even stop an HIV protein binding to a human protein, both in purified protein solutions and in cell cultures. The researchers suggest that bacteria could be used to build-up libraries of up to a billion cyclic peptides.