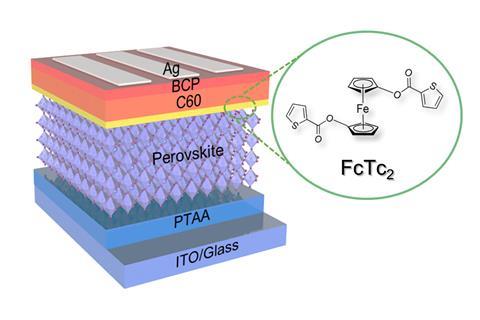 Adding an organometallic compound to a perovskite solar cell can enhance their efficiency and their stability spectacularly, enabling them to run for 1000 hours with only a minimal drop in performance. The researchers believe the cells can now take the first steps towards commercialisation.

Perovskite solar cells have multiple advantages over silicon solar cells. Most notably, perovskites – unlike silicon – are direct band-gap semiconductors, which means they absorb light much more efficiently so that only a thin layer is required. They could therefore be prepared cheaply using solution processes. Unfortunately, they have been plagued by sensitivity to moisture, air and even light. Numerous research groups have experimented with various stabilisation techniques, but no perovskite photovoltaics have hitherto shown durability close to that required of commercial solar cells, which are generally guaranteed for 25 years.

Traditional n-i-p perovskite solar cells have the n-junction, which extracts the electrons, facing the light, followed by the perovskite with the p-junction on the bottom. However, in this work inverted perovskite solar cells, in which the junctions are switched, were used. These promising devices have shown somewhat improved stability, but their record efficiency is 23.3% – 2.4 percentage points lower than the best traditional designs.

The organometallic compound ferrocene has been shown to help extract electrons from perovskites, increasing the efficiency of the cell and also stabilising the interface. Researchers have therefore experimented with solar cells containing various ferrocene derivatives, with variable results. After hearing organometallic chemist Nicholas Long of Imperial College London speak on new ferrocene compounds, materials chemist Zonglong Zhu suggested incorporating them into solar cells. Long’s group subsequently designed a series of ferrocene compounds. Zhu’s group at City University of Hong Kong then designed photovoltaic cells with a layer of each organometallic compound between the n-junction and the perovskite – the most successful cell contained ferrocenyl-bis-thiophene-2-carboxylate. The researchers then conducted density functional theory modelling, as well as spectroscopic and microscopic analysis, and concluded that the central ferrocene group facilitates charge extraction, while the substituent groups reaching down into the perovskite inhibit ion migration that normally leads to decomposition. ‘It’s these side arms on the metallocene that are particularly important,’ explains Long.

The researchers recorded 25% efficiency for their device, and an independent testing laboratory confirmed a record-breaking 24.3%. The researchers then subjected the cells to an internationally recognised stress test for commercial solar cells: after 1000 hours of continuous solar-equivalent illumination at 85°C and 85% relative humidity, their devices were still operating at more than 95% of their initial power. ‘In reality, it is impossible for us to test it for 20 years and then commercialise it,’ says Zhu. ‘Silicon solar cells will sustain a 3% loss in these stress tests, which are designed to be very rigorous and give an accurate indication of long-term performance. Our device performs similarly to silicon so we believe it should have similar stability to silicon.’

‘What they describe here is something that a lot of groups, including mine, have been doing for the past four or five years – that is putting an organic material on top of the perovskite to stand between it and the electron-selective contact … but the result is quite spectacular,’ says materials scientist Juan-Pablo Correa-Baena of Georgia Tech in Atlanta, who works on p-i-n solar cells.

He is sceptical, however, that the cells’ stability over 1000 hours can predict their long-term durability. ‘In silicon, we can do this stress test and extrapolate how long they’re going to last. In perovskites, we have something else that happens which is ion induced, and that introduces a new variable that leads to degradation in the longer term that we don’t fully understand yet,’ he says. He believes more fundamental research is needed. ‘In order for us to understand what is causing the degradation or what is preventing the degradation, we have to do in situ measurements as the material is degrading, and that’s something people are really not doing,’ he says.