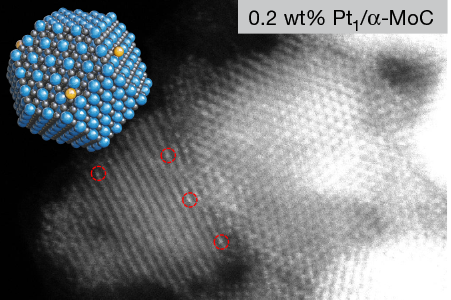 The water–gas shift reaction that combines carbon monoxide and water vapour to generate hydrogen is already one of most important reactions in industrial chemistry, as hydrogen is needed to produce fertiliser, methanol and countless other chemicals. It is often touted as a clean transportation fuel too because its only combustion product is water.

Unfortunately, current water–gas shift catalysts require high temperatures to work effectively – which pushes the reaction’s equilibrium away from hydrogen. The forward reaction is actually favoured by low temperatures. However, the copper- and iron-based catalysts used in industry today are ineffective at less than 300˚C, which is not only inefficient but can also create problems for fuel cells as unreacted carbon monoxide in the hydrogen can poison their platinum catalysts.

Researchers have therefore studied a range of low temperature catalysts for the reaction. In 2017, Ding Ma of Peking University in Beijing and colleagues reported that gold atoms on a molybdenum carbide substrate were highly active at temperatures as low as 150˚C.2 In the new research the team tested several molybdenum carbide catalysts with loadings of platinum ranging from 0.02wt% to 8wt%. The catalysts showed activity at temperatures as low as 40˚C and between 120˚C and 400˚C over 90% of the carbon monoxide could be converted by the 2wt%-loaded catalyst.

All the catalysts showed the highest activities of any ever reported for this reaction. Catalysts with 0.2wt% platinum or lower were initially the most active per platinum atom. This was expected, explains Ma, as the active site is the metal–substrate interface. ‘The CO adsorption is done on the platinum; the water activation is done on the molybdenum carbide.’ Platinum is therefore most efficient if atomically dispersed. However, this activity virtually vanished within 10h. Catalysts containing 2wt% platinum and higher showed lower initial activities per platinum atom but, after an initial decline, the activity persisted. ‘Molybdenum carbide binds very strongly with oxygen, so if there is no C–O bonded platinum to reform it, then the hydroxyl ion will gradually oxidise the molybdenum carbide ion into molydbenum oxide,’ explains Ma. ‘But if you have a high density of CO on platinum then these hydroxyl ions continuously turn over to produce carbon dioxide and hydrogen.’

The proposed mechanism for the catalyst, which the authors believe also proceeds by an unusual carbon radical route

Isotopic labelling of the reactants led the researchers to conclude that, as well as the usual mechanism, an additional mechanism occurs on the surface of their catalyst, helping to explain its unprecedented activity. Instead of adsorption of the hydroxyl radical followed by oxygen exchange, the proposed mechanism involves cleavage of the CO double bond, producing carbon radicals that react directly with the adsorbed hydroxyl groups by one of two similar paths. ‘This has not been reported before,’ says Ma. ‘The share [of hydrogen generated] from these new routes we think is about 30–35%.’

Susannah Scott at the University of California, Santa Barbara is impressed. ‘The catalyst does seem to be highly active for the low temperature water–gas shift reaction, and stabilised towards oxidation of the molybdenum carbide phase, which has been a problem in past studies,’ she says. However, she cautions that quantitative comparisons can be misleading as reaction rates can depend ‘strongly and non-linearly’ on operating conditions. She is more sceptical about the ‘very unusual’ proposed new mechanism. ‘The CO bond is exceedingly strong, so its rapid and reversible rupture at low temperature is unexpected,’ she says. ‘More studies are needed to support this hypothesis, including ruling out isotopic exchange by other mechanisms such as reversible carbonate formation.’