Researchers in Hong Kong and Germany have unveiled a new chemical ligation strategy to design peptides with a range of complex structural features. The group, led by Xuechen Li at the University of Hong Kong, used benzofuran groups to incorporate salicylaldehyde esters in the peptide side chains, which enabled them to construct a diverse array of peptide scaffolds. The group hopes their work will open new avenues for synthetic peptides and inspire the design of new protein–protein interaction inhibitors, a crucial class of therapeutics for numerous diseases.

Pharmaceuticals are often small molecules that target enzymes and receptors, and selectively bind in the deep pockets of their substrate to produce the desired effect. However, many biological processes depend instead on interactions between large, flat and shallow protein surfaces. Research has shown that abnormalities in protein–protein interactions (PPIs) can be pathogenic, driving chemists to develop molecules capable of disrupting PPIs. This poses a challenge for synthetic chemists, as typical small molecule inhibitors are often less effective at interacting with the relatively featureless protein surfaces involved in PPIs. Synthetic peptides are a promising alternative, as their larger size and adjustable conformational features permits effective binding to protein surfaces. Unfortunately, peptides bear their own set of limitations, including their susceptibility to protease degradation and limited cell membrane permeability. Recent research efforts have focused on overcoming these issues via careful structural modification. 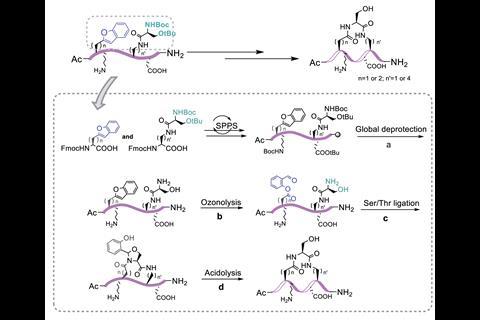 The strategy uses the benzofuran moiety as a peptide salicylaldehyde ester surrogate, and Dap–Ser/Lys–Ser dipeptide as the hydroxyl amino functionality, which can be introduced at the side chain of peptides enabling peptide ligation 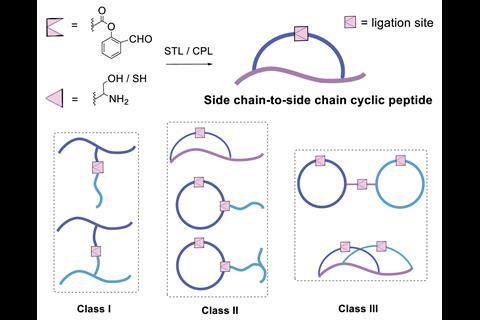 The Li group develops ligation strategies for linking peptide segments via their side chains to construct highly specific peptide architectures. However, installing reactive salicylaldehyde ester groups on peptide side chains has proven an enduring challenge, as many are not stable to the resin cleavage step in solid-phase peptide synthesis. Now, Li’s group has overcome these limitations by masking the salicylaldehyde ester as a benzofuran moiety, which upon ozonolysis reveals the salicylaldehyde ester for subsequent chemoselective ligation. To demonstrate the scope and utility of their strategy, the group showed different classes of peptide were accessible via their synthetic route, including branched, bridged, tailed cyclic and multi-cyclic peptides.

‘The beauty of chemoselective ligation reactions is their ability to form covalent bonds in complex environments, often without added reagents or catalysts,’ comments Jeffrey Bode, an expert in synthetic organic chemistry and organic protein synthesis at the Swiss Federal Institute of Technology, ETH Zurich. ‘The baked in reactivity of the ligation handles, however, often makes it difficult to install the key functional groups into peptides and proteins, as such groups are often not stable to resin cleavage or protein folding. [The group’s] elegant strategy makes possible the construction of a number of topologically unique cyclic peptides.’

Li hopes the group can extend their strategy further. ‘We are looking to develop peptide ligation methods enabling higher order cyclic peptide synthesis … [as] there are still many possible peptide architectures yet to be explored. We are also hoping to apply this chemistry to the real-world development of peptide PPI inhibitors and peptide–drug conjugates.’