Silicon industry will be ‘beating a path to the door’ of inventors, says scientist

A UK company claims it can boost the efficiency of a silicon solar cell by 20% by adding a layer of the light-sensitive crystal perovskite. Oxford Photovoltaics believes that the efficiency boost – about 4% in absolute terms, but a 20% relative increase on the underlying silicon – will provide an entryway for perovskite into the highly competitive photovoltaics market. 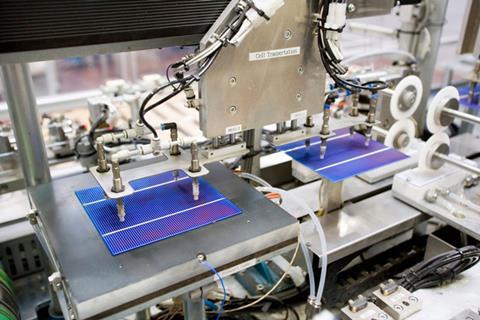 ‘We’re telling the silicon people today, the people who make the cells and panels, we can help you make a better product, a more efficient product, one that’s worth more money,’ Chris Case, the chief technical officer of Oxford Photovoltaics, tells Chemistry World.

Perovskites started life in photovoltaics research in 2009 as a dye to absorb light and create charges, which could be separated for electricity generation in a standalone semiconductor. A breakthrough came in 2012, however, when scientists, including Henry Snaith at the University of Oxford in the UK, realised that the semiconductor in these dye-sensitised cells was redundant, and that the perovskite could shift the charges efficiently by itself.

In five years, reported efficiencies of standalone perovskite solar cells in the lab have risen from 4% to nearly 20%, making perovskite the fastest developing technology in the history of photovoltaics.

Despite the impressive results, perovskite faces a tough battle to market on its own. According to Case, the material would have to consistently demonstrate efficiencies exceeding the current market leader – crystalline silicon – in large-area cells. And then there is what Case calls the ‘resistance factor’: the fact that an established silicon industry will attempt to squash any emerging technology before it gets a foothold.

Oxford Photovoltaics – which was set up by Snaith and his colleagues in 2010 – believes the best strategy therefore is to sell perovskite to the silicon industry as a performance booster. It has created a 10cm2 ‘tandem’ cell, comprising a 17% efficient silicon cell overlaid with a 15% efficient perovskite cell, in a monolithic arrangement.

We are confident that the perovskite material will meet customer needs

Together, the company claims, the two cells exhibit an efficiency of 21.3%. The best commercial silicon solar panels have an efficiency between 21% and 22%.

‘Oxford Photovoltaics are really onto something significant,’ says Michael Walls, a physicist at Loughborough University in the UK who specialises in thin-film photovoltaics. ‘By combining their perovskite photovoltaic films with conventional silicon solar cells, they have increased the efficiency [of the underlying silicon cell] by about 20%. That is a step change and I would expect the silicon module manufacturers to be beating a path to their door.’

The physics of tandem cells goes back to the 1970s, and commercial tandems already exist today for specific applications. Perovskite has the potential to make a particularly good tandem, however, because its composition – and thus its band gap, or peak light sensitivity – can be tuned to complement silicon, says Case.

The downside of perovskite until now has been its stability, with certain compositions prone to degrade when exposed to heat and rain. Case agrees that there is ‘no future’ for perovskite–silicon tandem cells unless they can be demonstrated to be reliable when exposed to the elements for 25 years or more.

‘We focused nearly an entire year on improving the stability of our perovskite material,’ says Case. ‘We are confident that it will meet customer needs and we test internally to the same IEC61646 standard [for outdoor durability] that the industry uses.’