Illuminated under the midday sun, solar cells can quickly convert sunlight into electricity, but their performance often drops as the clouds begin to gather. Now, scientists in China have made an ‘all-weather’ solar cell that can exploit both sunshine and rain. 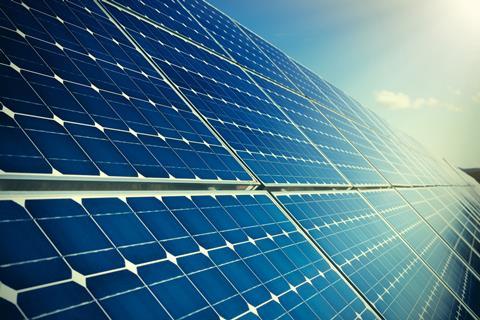 Solar cell installations have soared in recent years as consumers and businesses have become savvier about sustainable technologies and the impact of climate change. In the US, there is now an electricity-generating capacity of 20GW from photovoltaic devices – enough to power over 4 million homes.

But the sun isn’t always shining, with solar panels often installed in areas affected by unpredictable and inclement weather. This is especially true for the UK, where it rains for more than 40% of the year. As a result, cell efficiencies fall and electricity supplies suffer.

Qunwei Tang and his colleagues at the Ocean University of China have been trying to improve the performance of solar cells in such conditions. ‘We would like to build solar cells that can generate power in all weathers – [under the] sun, rain, fog, and night,’ says Tang.

To do this, the team has made a modified dye-sensitized solar cell (DSSC) that can convert sunlight into electricity, but also exploit ionic charge in salty raindrops to generate current. DSSCs consist of titanium dioxide nanoparticles coated with a photosensitive dye. Along with a solvent the particles are sandwiched between a platinum cathode and a transparent fluorine-doped tin oxide anode.

Tang’s design replaces the platinum electrode with a platinum–transition metal alloy. When salty raindrops fall on this side of the device, cations within the water attract electrons from the alloy. The drop stores charge like a capacitor and discharges as it changes shape – the cell is capable of producing a current of 3.90µA. Along with a photoelectric efficiency of 10.38%, the cell outperforms the group’s previous design, which used a graphene cathode.

However, Andy Clayton from the Centre for Solar Energy Research at the University of Swansea, UK, questions whether the current generated through rainwater is enough. ‘It presents an interesting concept for generating electricity from rain water,’ Clayton tells Chemistry World. ‘However … there would have to be several order of magnitude improvements for it to be a viable way of generating electricity.’