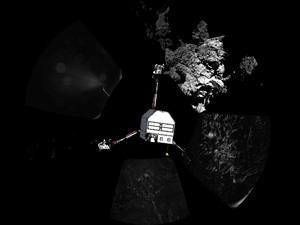 The first measurements taken by the Philae lander, which touched down on Comet 67P on 12 November, reveal organic compounds are present on the comet’s surface, and also hint at a dense, icy interior.

Philae made history after successfully landing on the comet after a 10-year journey on board the European Space Agency’s Rosetta probe. Unfortunately, the landing didn’t go according to plan and Philae touched down in a shadowy hollow without enough sunlight to recharge its batteries. After the landing, scientists had to hurry to gather as much data as possible from Philae’s instruments before it ran out of power and went into hibernation. This happened on 15 November, and teams have now begun to work through the 60 hours’ worth of observations beamed back to Earth.

Most of the 10 instruments Philae was carrying were successfully deployed and managed to take measurements. The cometary sampling and composition system (COSAC) detected organics in the atmosphere at the comet’s surface – although the exact nature of these compounds and what they can tell us about 67P is still being analysed. The multi-purpose sensors for surface and sub-surface science instrument also managed to hammer a probe into the surface, which because of its hardness is thought to consist of water ice covered with a layer of dust.

Unfortunately, despite the drill being activated, the lander’s sampling system didn’t manage to collect a soil sample for COSAC to analyse. However, there are hopes that Philae will be able to power up again in a few months when the comet moves closer to the sun and the lander’s solar panels are illuminated.