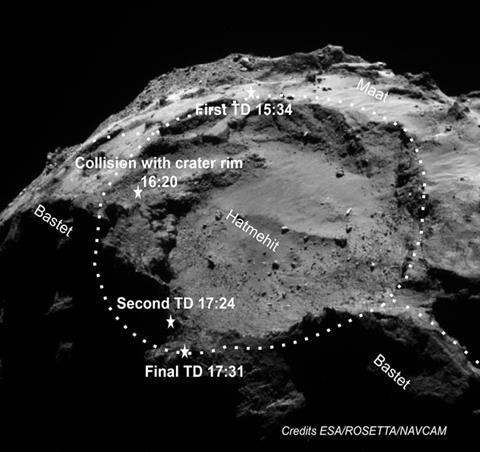 As the Philae lander bounced across comet 67P/Churyumov–Gerasimenko’s surface in November last year, two chemical instruments were able to take tentative – but intriguingly contradictory – sniffs of its environment. Those mass spectrometry measurements provide compositional details important for deciphering the origins of life on Earth, a key aim of the Rosetta mission that carried Philae. But while the cometary sampling and composition (COSAC) instrument detected 16 organic molecules1, half of which contain nitrogen atoms, Ptolemy reports very low concentrations of nitrogen-containing compounds2.

Nevertheless, Jen Blank, a senior scientist at the Nasa Ames Research Center in California, US, highlights the historic achievement of syncing orbit with a comet and sending a lander down to the surface. ‘The Philae data are amazing,’ enthuses Blank, who’s studied how comets may have supplied Earth with molecules needed for life, but wasn’t involved in Rosetta or Philae. ‘These are the first measurements of organic compounds collected directly on a comet or asteroid.’

Philae was programmed to take sniffs shortly after touching down on 67P as an ‘insurance policy’, explains Ian Wright from the Open University in Milton Keynes, UK, and principal investigator for Ptolemy. That was well planned, because the touchdown became a rebound that sent Philae out of communication range, preventing further measurements to date.

The lander was also therefore in motion in the minutes between the instruments doing their respective basic analyses, or sniffs, of whatever material happened to have entered them. One potential explanation for the distinct results is therefore that they reflect differences between locations on the comet, Wright suggests. The fact that COSAC’s sample port is on Philae’s underside, and Ptolemy’s is on its top is another. ‘Have we analysed separate grains?’ Wright asks. ‘We’ve no reason to expect that the surface would be homogenous.’

COSAC’s best sniff happened automatically 25 minutes after Philae’s first contact, while the lander was around 150 metres above the surface. The instrument consists of a gas chromatograph and a time-of-flight mass spectrometer intended to analyse organic compounds in samples drilled from the comet’s surface. Though Philae couldn’t drill, the impact threw up some solid material, part of which apparently entered COSAC’s two exhaust pipes. The COSAC team, headed by Fred Goesmann from the Max Planck Institute for Solar System Research in Göttingen, Germany, thinks the exhaust’s warmth evaporated volatile compounds, allowing their detection. 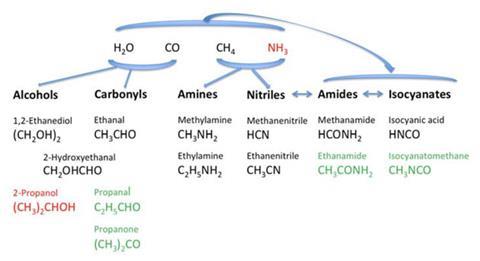 Possible formation pathways of compounds on 67P. Species in red are not confidently identified; green are cometary firsts

The compounds COSAC identified included methyl isocyanate, acetone, propionaldehyde and acetamide, which have not previously been reported in comets. Acetamide is also one of four compounds detected that can produce important biological molecules like amino acids, sugars and DNA bases. Blank is especially excited by acetamide’s presence. ‘It's easy to imagine a pathway to an amino acid,’ she says.  However, Goesmann is cautious not to read too much into their presence. ‘Comets with such a composition do not work against life,’ he tells Chemistry World. ‘In the right environment, emerging life could make use of it.’

However, the small amount of material COSAC was looking at meant it couldn’t detect anything but the smallest compounds. That means it wouldn’t have seen any ‘molecules of life’, such as amino acids, even if they were present. And although it could have, it didn’t see much ammonia, formaldehyde or carbon dioxide, which are common components of cometary ice, or any sulfur compounds. The COSAC scientists link the lack of ice to measurements previously made by Rosetta showing 67P’s surface is covered in a carbon-based coat rather than frozen.

To determine isotope ratios of chemicals on 67P and establish their origins, Ptolemy’s gas chromatograph and ion trap mass spectrometer were also supposed to be fed drilled samples. However, it was reduced to making six sniffs at 14 second intervals about 20 minutes after Philae hit 67P. Like COSAC, it failed to find any signs of sulfur. Ptolemy saw mostly water and carbon dioxide, ice components expected on comets, but no significant indication of ammonia, and very low levels of nitrogen compounds overall. The COSAC scientists suggest that the absence of this key source of nitrogen could be because it has evaporated or been used up in reactions.

Ptolemy also found hints of polyoxymethylene, a polymer thought to be produced from formaldehyde by cosmic radiation, previously detected on Halley’s Comet. This source of formaldehyde is another important potential resource for origin-of-life chemistry, Wright underlines. ‘It can produce simple sugars like ribose,’ he says. ‘These are things that we hope will be picked up by astrobiologists in refining their ideas.’

John Plane from the atmospheric and planetary chemistry group at the University of Leeds calls these measurements ‘technically incredible’. ‘It’s a wonderful achievement to get any data,’ he says. Plane is especially pleased because COSAC’s findings support lab experiments showing cometary ice can produce small organic molecules. ‘It’s nice to have them confirmed, and get a first idea of relative abundance,’ he says. ‘That’s useful if you want to simulate the next step, how these molecules could react together to make peptides and DNA.’

Meanwhile, Rosetta has recently regained tenuous contact with Philae, enough for scientific commands to be sent to Ptolemy last week, Wright reveals. ‘We haven’t got any data back,’ he admits. ‘When we get a communication window it might come back, but it’s a fingers crossed job. As time goes on we’re becoming less convinced that’s going to happen.’