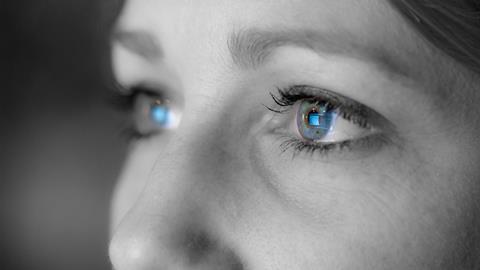 Short wavelength blue light produced by low intensity displays such as smartphones and televisions has been identified as being damaging to human eye cells by a group of Korean researchers. The scientists believe that their study could encourage development of devices that are less harmful to our eyes.

Scientists have previously discovered that blue light, especially at shorter wavelengths, can damage cells in the retina, the light-sensitive layer of tissue that lines the inside of our eyes. Blue light produces reactive oxygen species (ROS), such as superoxide radicals, in retinal cells. This can lead to cell death. However, previous research has focused on high intensity light, such as that from light emitting diode lamps.

As our lives are increasingly spent staring at phones, laptops and televisions, Young Pyo Jang from Kyung Hee University, Jong Soon Kang from the Korea Research Institute of Bioscience and Biotechnology and their team have now investigated the effect of low intensity blue light on retinal cells. They found that short wavelength blue light doubles the death rate in human retinal cells compared with cells kept in the dark.

The researchers added N-retinylidene-N-retinylethanolamine, a molecule that reacts with light to produce radicals, to human retinal cells and exposed them to different wavelengths of low intensity blue light using liquid crystal and organic light emitting diode displays the size of a smartphone. 24 hours of exposure to the shortest wavelength blue light (449nm) caused the largest increase in ROS production – almost twice as much as in a control group that was kept in the dark. Even white light with a blue wavelength peak at 449nm, simulating real-life conditions, increased ROS production and cell death, with more than double the amount of cell death than in the dark control group.

‘The study suggests it is prudent to adjust screen brightness to be no brighter than needed to do the work or enjoy the entertainment,’ says Joshua Dunaief who researches aging of the retina at the University of Pennsylvania, US.

However, Glen Jeffery, visual neuroscience researcher at the University College London, UK, remains sceptical: ‘There is a big leap between the data presented [in this study] and the real world. No one is exposed to 24–48 hours of continuous blue light at the intensities used.’ He explains that the human eye has range of protective mechanisms, blocking wavelengths below 400nm.

Jang, Kang and their group would now like to follow their study with in vivo experiments to confirm their findings.