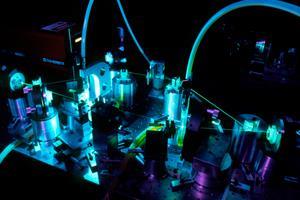 A team of scientists from Israel and Germany have manipulated bond formation in a chemical reaction using high power lasers. The technique will allow chemists to control the path of a chemical process with exceptional precision and opens up the possibility of ‘photochemical assembly lines’ churning out specific molecules much further down the line.

Using lasers as ‘photo-catalysts’ in gaseous chemical reactions has seen limited success in recent decades, with chemists able to break bonds by exploiting increasingly energetic lasers. To control bond creation with light pulses, however, has proven rather more elusive.

‘Coherent control, that is the use of matter–wave interferences [in atoms] to steer a dynamical process towards a certain target [using light], has always fascinated me,’ says Christiane Koch from the University of Kassel, who carried out the work. ‘It seemed very unsatisfactory that even though [it] was conceived to steer chemical reactions, nobody seemed to be able to do it.’

Koch explains that it has been very difficult to stimulate such a complex quantum mechanical process and, even if you can achieve such a feat, to even detect that it’s happening. ‘Laser-induced bond formation in a gas is a low probability event, so it was crucial to find a way to detect it unambiguously,’ she explains. ‘In more fundamental terms, a gas at high temperature has high entropy but coherent control requires low entropy.’

To get around these issues, the team exposed magnesium vapour at 1000K to a femtosecond laser pulse. By only firing the laser at a small number of atoms in the gas, which have lower entropy than the whole system, Koch and her colleagues were able to achieve coherent control via a rather simple process.

‘A very short and intense laser pulse is shone onto a gas of atoms,’ says Koch. ‘The energy absorbed from the pulse leads to a rearrangement of the atoms’ electrons, resulting in a chemical bond.’

She goes on to explain that the newly formed magnesium dimers subsequently absorb more energy from the pulse and emit UV light. This emission allows the team to detect that the photo-association reaction has occurred and confirm that bonds have formed.

‘Quantum control has been a playground for theorists for years,’ says Volker Engel from the University of Würzburg, Germany, who was not involved the work. ‘That laser control … is possible experimentally was not really proved. [This research] documents that this is indeed possible.’

But, as Koch explains, the team have gone down a difficult road to get to this point. ‘We have had difficulties in getting this research funded because the reviewers did not believe that the process could work,’ Koch tells Chemistry World. ‘We hope that these accomplishments will motivate other groups to look again into the coherent control of chemical reactions and thus revive the field.’