A debate over whether photoredox-catalysed reactions proceed via chain processes may now be settled, thanks to new mechanistic insight brought to light by scientists in the US. The research, led by Tehshik Yoon at the University of Wisconsin–Madison, shows that commonly used light/dark experiments can result in mechanistic misdiagnosis.

Whilst interest in photoredox catalysis has recently burgeoned – the reactions are used in natural product and pharmaceutical synthesis – our understanding of their mechanisms hasn’t kept pace. In particular, the extent to which the reactions involve chain processes is not fully understood, leading to conflicting explanations. Several groups have reported that the final product-generating step proceeds only by reduction of the radical cation product by the reduced photocatalyst in a closed catalytic cycle, whilst others have reported that the product is formed by an additional chain propagation step involving another equivalent of substrate. 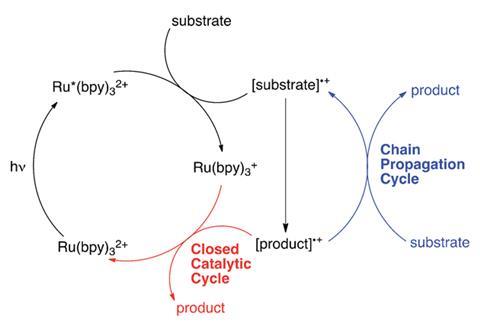 Light/dark experiments are a common way to rule out chain processes from photoredox mechanisms. The simple experiment assumes that if a reaction requires constant visible light irradiation for product formation, chain processes do not occur, or at least do so on a very short timescale.

However, such experiments may now have to be interpreted with care. By combining luminescence quenching with quantum yield measurements, Yoon obtained compelling evidence that several representative radical reactions in fact proceed via chain reactions when light/dark experiments indicated otherwise, proving the experiments cannot be used to unambiguously rule chain propagation out.

‘Quantum yield measurements essentially tell us how many molecules of product you make for each photon that’s absorbed,’ explains Yoon. ‘There’s a long history of using these measurements to study the efficiency of photochemical reactions. If each photon results in the formation of many equivalents of product, this is a clear signal of a chain process. On the other hand, a small quantum yield is inconclusive because there are lots of ways the energy of a photon can be wasted without making product.’ One source of inefficiency is re-emission of the photon via phosphorescence, which the team used luminescence quenching measurements to correct for.

Catalysis expert Robert Knowles, of Princeton University in the US, says the work is important but shouldn’t undermine the recent extraordinary synthetic achievements in the field. ‘I’m sure the researchers would agree that these results shouldn’t be taken as evidence that advances in photoredox catalysis over the past few years are simply modern versions of conventional radical chain chemistry, or that all photoredox transformations could be readily achieved using classical initiators. Many of the most synthetically interesting photoredox reactions are those where the propagation steps are prohibitively slow and unable to sustain a chain. In these instances the closed catalytic cycles likely operate and facilitate reactivity that has otherwise been challenging or impossible to achieve. Both reaction manifolds can result in the development of synthetically important transformations, and that the value of these processes should be the metric by which the field is ultimately evaluated.’

Yoon can understand this view. ‘If a reaction works well and enables you to make a structure more efficiently that you might otherwise be able to, I’m not sure I could make a strong case that it really matters precisely how the reaction works,’ he tells Chemistry World. ‘Where it does matter is when a reaction doesn’t work as well as you need it to – it’s critical to know which steps are inefficient so that you can focus on improving them. My suspicion is that chain reactions are much more common in photoredox chemistry than is generally appreciated. I think that we are getting to the point in the development of this field where we really need a better fundamental understanding of mechanism if we want to develop really innovative new reactions’. Yoon hopes his approach will become an established protocol to study other photochemical reactions.