With the constant drive to make chemical synthesis ever cleaner, more energy-efficient and generate less waste – both in research and industrial processes – more and more chemists are looking to harness enzyme catalysis. But many enzymes don’t work in isolation. They are aided by small molecule cofactors, such as the redox couple of nicotinamide adenine dinucleotide, NAD+/NADH.

HydRegen is a technology developed in Kylie Vincent’s research group at the University of Oxford, UK, which provides a clean and efficient way to recycle the NADH cofactor in an effort to make it more accessible to synthetic chemists. ‘NADH is often more expensive than the chemical you’re trying to produce,’ says Vincent, ‘so if you’re going to use these enzymes in synthesis, you need cheap ways of recycling the cofactor.’

HydRegen’s catalytic system uses cooperative sets of enzymes, mounted on graphite beads. The first enzyme splits hydrogen gas into two protons and two electrons. The electrons shuttle through the conductive bead to a second enzyme, which uses them in combination with a proton to reduce NAD+ to NADH. The NADH can then be engaged by the third enzyme that catalyses the desired chemical transformation. All the enzymes are attached to the bead to keep everything close together for maximum efficiency. ‘It’s a very simple way to package all the enzymes you need to carry out a particular reaction step,’ Vincent says. 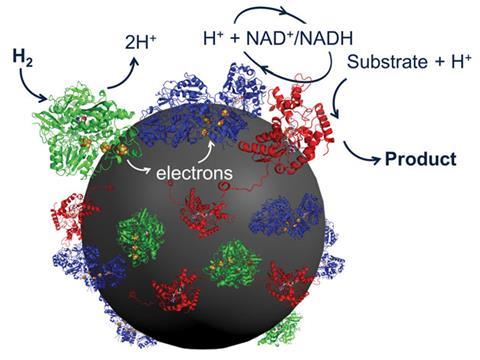 Vincent explains that all of the industrial methods for recycling NADH already use enzymes, but they also usually use a sacrificial carbon-based starting material. That leads to a carbon-based by-product, which contaminates the reaction product, generates extra waste, and usually gets burnt at the end of the reaction.

‘Hydrogen gas is a very clean reductant,’ she adds. ‘We have no waste products, because the hydrogen is split into two protons and two electrons and those are incorporated into the product. Effectively we’re simply adding hydrogen – often across a double bond – to make the product.’

Three heads better than one

Vincent acknowledges that there are single enzymes that could do the whole NADH regeneration process, but they tend to be quite fragile. HydRegen’s modular approach can match up the right enzyme combination for the reaction conditions. ‘If we want to do the reaction in the presence of oxygen, we can choose a more oxygen-tolerant hydrogen-oxidising enzyme,’ she points out. ‘If we want to use specific temperature or pH conditions, we can plug in appropriately tuned enzymes.’

That is where the team has really built up its expertise. Identifying the right combinations of enzymes for different reactions, and getting them attached to the beads in the right relative proportions so that all the parts of the cycle are working at similar rates requires some delicate manipulation and patience. ‘Each enzyme and combination of enzymes kind of has its own personality – you have to get to know them a bit,’ says Holly Reeve, who works with Vincent on the project.

Another significant challenge comes not from the enzymes themselves, but from the fact that the reactions need to be done in water. While this is more environmentally friendly than using organic solvents, many of the organic substrate molecules have poor water solubility. The answer is often to have a two-phase system, where the reaction occurs at the interface between the organic and aqueous media.

Out of the lab 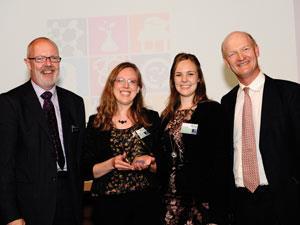 Winning the Emerging Technologies competition has opened up new collaborations

The team is now taking its first few steps towards commercialisation, with the aim of forming a spin-out company or licensing the technology to a partner. ‘We’ve shown that the concept works, attaching three enzymes onto carbon beads, and using hydrogen gas to drive transformations of several organic molecules,’ says Vincent. The next step is to start working with companies to demonstrate the beads working for reactions that have real industrial relevance. ‘That ranges from the pharmaceutical sector right through to making simple chemical building blocks from biomass waste,’ she adds.

HydRegen is one of the winners of the Royal Society of Chemistry’s 2013 Emerging Technologies competition. As part of the prize, the team has access to mentoring from the competition partner companies. ‘We’re now starting a project with GlaxoSmithKline, one of the competition mentors, to see whether our enzyme-modified beads can work for several reactions that they’re interested in as steps in pharmaceutical synthesis,’ says Vincent.