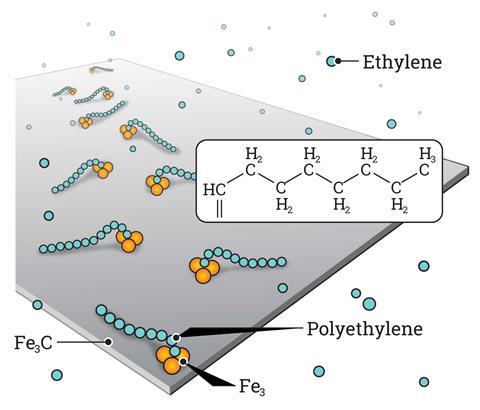 Researchers use an iron carbide film (Fe3C) with staggered rows of iron trimers (Fe3) that act as connection sites – known as active centers – for polyethylene formation on the surface of this model catalyst. As resolved by using a scanning tunneling microscope, chain initiator groups (=CH–CH3) are observed to bind to these centres, which allow the formation of longer polymer chains by inserting further ethylene molecules

For the first time, researchers have visualised the step-by-step formation of polyethylene from simple monomers. They achieved this thanks to scanning tunnelling microscopy (STM), which provides atomic resolution to follow the fate of propagating polymer chains on the catalyst surface. The experiments confirm a classic reaction mechanism proposed almost 60 years ago.

The discovery was serendipitous, explains lead author Kai Wu from Peking University, China. ‘We tried iron carbide because it had worked for similar reactions … luckily it also catalysed ethylene polymerisation,’ he says. This very active solid surface was key to visualise the reaction, together with advanced STM techniques.

Images show the adsorption of the monomer, the formation of the initial intermediate – ethylidene – and the progressive growth of the polymer chain. This provides direct mechanistic evidence for the Cossee–Arlman hypothesis, originally published in 1964, which remained elusive, explains polymer expert Clare Mahon from Durham University, UK. ‘This suggested polymer chains propagate by the insertion of monomer units into a metal-carbon bond,’ she says. STM shows them clearly on the catalyst surface. ‘[These are] remarkable images of the polymerisation process,’ she adds.

Movies of molecules and catalysts together constitute a powerful tool to discern between possible pathways, says Joe Patterson, from the University of California, Irvine, US. As an expert in materials science and electron microscopy, he understands the challenges of drawing conclusions from STM images. ‘What’s obviously there for the trained eye, is not evident to everyone.’ Therefore, to ensure high quality images of every step are recorded, researchers carried out the polymerisation at room temperature. Then, to photograph and characterise the more elusive intermediates, they occasionally quenched the reaction, lowering the temperature below 10K. ‘This “freezing” process guarantees much better resolution,’ says Wu.

Moreover, microscopists often complement direct visualisation with computational simulations, says Patterson. ‘In this case, researchers used DFT to [further] look at the adsorption of ethylene on the surface,’ he adds. ‘We also conducted STM image simulation to confirm the results,’ explains Wu. The team compared the computer-generated graphics with the real photographs to confirm their hypotheses. Among other things, this strategy revealed the active site – a cluster of three iron atoms. The brightness of this species under the microscope helped researcher locate the initial intermediates and identify the first steps of the reaction.

‘The goal was creating a situation to observe [this] chemistry for the first time, [testing] a fundamental hypothesis,’ explains Patterson. ‘Understanding [these] molecular pathways will bring new knowledge to the field of polymer chemistry,’ he adds. In the future, Patterson imagines applying similar methodologies to study the opposite reaction – depolymerisation. Grasping such mechanisms will become ‘essential for solving the plastic […] problem.’

‘[Our] method … will hopefully uncover more mechanisms soon, which is fundamental and challenging in polymer chemistry,’ adds Wu. And, thanks to advanced microscopy, ‘seeing is believing’.