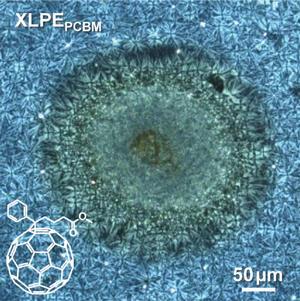 Optical micrograph of the structure PCBM fullerene added to a plastic

High-voltage AC cables are vital for transmitting renewable electricity efficiently from remote locations such as off-shore wind turbines. Ramping up the voltage on existing power grids improves their transmission efficiency but at a price – the cables’ insulating layer fails faster, which can cause the cable to break. But adding tiny amounts of buckyballs to the insulators makes them more resistant to high voltages, Swedish and Australian researchers have discovered. ‘Improving the quality of the insulation material and hence the efficiency of power transport enhances the scope of renewable [energy sources],’ says Christian Müller, one of the study’s lead scientists from Chalmers University of Technology, Sweden.

Increasing the insulator’s thickness is currently industry’s best response to higher voltages, but makes already heavy cables even more difficult to handle. Voltage stabilisers circumvent this problem: added to the plastic in small amounts they prevent degradation under high voltage – a concept known since the 1970s, but never used commercially. The problem with additives, explains Len A Dissado, professor emeritus at the University of Leicester, UK, and expert in electrical polymer degradation, ‘is that a high loading is required (ca 1%wt) and this can be hard to achieve as they only have a low solubility in polyethylene’. This means they require specialised – and expensive – manufacturing procedures and will eventually leach from the insulation.

Müller’s group, working with polymer manufacturer Borealis, started adding small amounts of C60 and its soluble derivative, [6,6]-phenyl-C61-butyric acid methyl ester (PCBM), to the polyethylene insulating layer. When tested to destruction, insulators modified with only 0.1wt% PCBM survived 26% higher voltages compared with an untreated cable. Weight-for-weight, PCBM is five to six times more efficient than other voltage stabilisers, such as anthracene. Moreover, fullerenes covalently bind to the polymer chains, meaning they won’t leach out. Müller believes voltage stabilisers are the way forward in energy transport technology. ‘We are experimenting with other molecules now that show an even better effect,’ he hints.

Müller’s team used a standard industrial process to make their fullerene-stabilised cables. ‘[The researchers] have shown that [fullerenes] are compatible with the current processing technology,’ comments Dissado, ‘[meaning that] the idea of fullerene voltage stabilisers stands a good chance of being adopted by the industry once long term experiments have demonstrated that they … retain their effectiveness.’