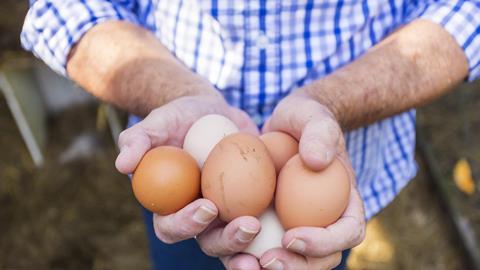 A way to tell the sex of chicken embryos within developing eggs could end the mass killing of male chicks if adopted by the egg industry, according to the German scientists behind the technique.

The team – led by Roberta Galli and Gerald Steiner at the Dresden University of Technology – has been funded for a number of years by the German Federal Office for Agriculture and Food to develop a method of ‘in ovo’ sexing. The hope is to avoid culling 40 million unwanted day-old cockerel chicks in the country every year.

‘As the red blood cells of birds possess a nucleus, they also carry the genetic sex information,’ says Galli. The group showed they could analyse fluorescence signals from embryonic blood vessels directly in the egg. After creating a tiny window in the shell, they can then illuminate the vessels using a near infrared laser and measure the backscattered radiation.

‘The spectra consist of the strong fluorescence signal of haemoglobin and of the Raman scattering signal. Both signals convey complex biochemical information about blood cell composition that can be used to obtain the sex of the embryo,’ says Galli.

From taking several measurements from eggs at different development stages, they identified a specific band of fluorescence – at 910nm – that is only found in the blood of male chicks. Their method can be used to determine the sex of an egg three days after it has been fertilised – long before it would hatch.

This method is an improvement on previous versions of the technology which use Fourier transform infrared or Raman spectroscopy because it offers the potential to develop systems based on less expensive optical detectors, the group says, and therefore would be easier to scale up for industrial use. The fluorescence approach also has a higher success rate – correctly predicting the sex of 93% of the 380 eggs analysed. The group’s previous record, using Raman, was 90%. Eventually, the idea is to incorporate the method into a large-scale automated system that could measure and sort eggs quickly and accurately. Unwanted male eggs could then be used for animal feed, fertiliser or other industrial purposes.

But Simon Shane, a consultant vet and professor of poultry science at North Carolina State University in the US, points out that this level of accuracy is still not yet high enough for commercial applications. ‘We [in the US] would need a mechanised system to process 50,000 eggs per hour with 98% accuracy,’ he says. ‘There is [currently] no simple, cost effective technology to achieve [this].’

The sexing of day-old chicks using feather colour, he adds, is 99% accurate, and given the sheer number of chickens needed to maintain egg production, even a small decrease in accuracy could significantly push up costs. For example, even if the process was 95% accurate, the extra cost compared to a 99% standard would add up to around $15 million (£12.5 million) annually in the US, taking into account the cost of female eggs wrongly disposed of and the cost of rearing mis-sexed cockerels, as well as the process itself.

The Dresden group accepts that further improvements are necessary, but thinks a scale-up for practical applications is definitely ‘possible’ and are working with industrial partners to make a prototype device that will be ready this year. ‘We think it will take two to three years to develop a full automated system with a large throughput which meets the requirements of commercial hatcheries,’ says Galli.