Researchers in South Korea have developed a method for continuously producing gecko-foot-inspired adhesives.1

The amazing ability of geckos to run up walls and along ceilings has mystified people for decades. In 2012, scientists at the University of Massachusetts Amherst, in the US, identified the secret to this unique ability – geckos have millions of tiny hairs called setae on their toepads, which help them cling to surfaces through van der Waals forces.2

Since then, many researchers have tried to make synthetic mimics of gecko feet, typically by combining stiff fabrics such as carbon fibre with a soft elastomer resin like polydimethylsiloxane (PDMS). A mold patterns the mixture into a nanostructure that mimicks a gecko’s foot, which is then cured to maintain its structure.

A lack of suitable methods for producing these dry adhesives on a large scale, however, is holding them back from commercialisation. PDMS requires lengthy curing times, so isn’t suitable for continuous production on roll-type photolithography systems, which require short patterning times. Scientists have tested UV-curable resins as an alternative to PDMS, but the resulting materials proved too rigid to give good adhesion.

Now, Moon Kyu Kwak and colleagues in South Korea have developed a continuous production process for making PDMS-based adhesives. The system has similarities to the roll-type process, but different molding and heating processes. This allows them to cure thinner samples of PDMS at higher temperatures, but in less time. Kwak explains that they use a belt-type instead of a roll-type mold, so that they can heat the uncured PDMS sufficiently. ‘We have shortened a process that took an hour with existing technology to only three minutes,’ explains Kwak. 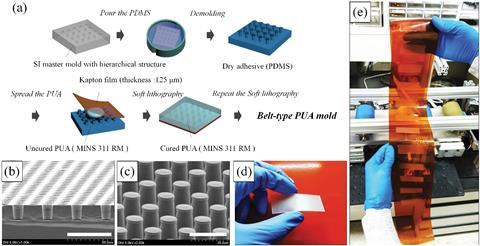 (a) Schematic image of the fabrication process for the belt-type mold. (b) Cross-sectional SEM image of the mold. (c) Tilted SEM image ofthe gecko-foot-inspired dry adhesive. (d) Photograph of the gecko-foot-inspired dry adhesive. The scale bars of (b) and (c) are 20and 50mm, respectively. (e) Photograph of the 100 mm-long belt-type mold for wrapping on two rollers

These adhesives could be used to transport clean glass, and Kwak’s team has demonstrated this on a robot arm, using the adhesive to pick up and move a glass plate. The adhesives don’t leave any contaminants on the glass surface, and maintain their performance after over 5,000 cycles.

Aránzazu del Campo, an expert in bioinspired materials at the Leibniz Institute for New Materials, Germany, says the approach will enable ‘faster production of micropatterned PDMS films’. However, she warns that there are some issues to be resolved in terms of reusability and detaching the materials before it’s commercialised.

Once these issues are fixed, Kwak and his colleagues aim to commercialise their dry adhesives through their spin-off company Ncoretechnology. ‘Compared with the current method, we think the production cost [of gecko-foot-inspired adhesives] could be decreased dramatically,’ he adds.