Cooking chemistry has a taste for making glue 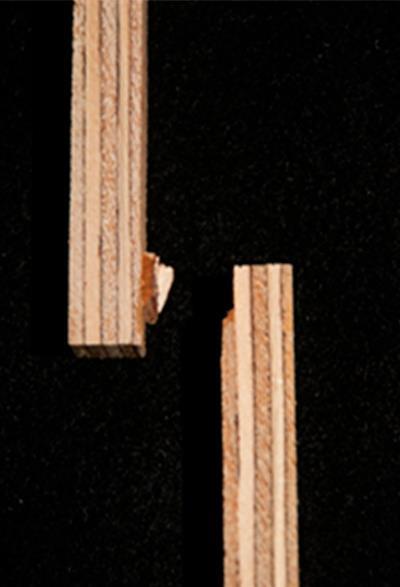 The new Maillard reaction glue was so strong that in tests sticking together two pieces of plywood, the wood broke before the adhesive bond did

Although it might not be as tasty as a baked bread or seared steak, a glue made with the same cooking chemistry could replace toxic adhesives in plywood.

A complex cascade process between amino acids and reducing sugars releases a lot of the flavour compounds associated with baked, cooked and fried food. The reaction that turns sloppy dough into deliciously crusty bread was discovered more than 100 years ago by French chemist Louis-Camille Maillard.

Jonathan Wilker and Jessica Román from Purdue University, US, have for the first time made use of the Maillard reaction’s sticking power: mixing protein and sugar creates a glue stronger than some commercial adhesives. ‘If you ever forget to grease the pan when making muffins you know there’s a really strong adhesion that sticks the muffins to the pan,’ says Terry Steele, adhesives researcher at the Nanyang Technological University, Singapore, who wasn’t involved in the study.

The discovery came as a surprise, Wilker recounts. ‘We were trying to engineer a fancy biomimetic protein and we were doing a control experiment: we took some generic proteins and put them under analogous conditions.’ The control wasn’t supposed to work, but made for a remarkably sticky mixture.

At least as strong as Gorilla Glue and stronger than six other commercial adhesives, the Maillard glue can stick together wood and aluminium. In tests with two pieces of glued wood, the wood breaks before the adhesive bond. Only on plastics does the glue perform poorly – like its commercial counterparts.

A cross-linking reaction between the amino acid lysine’s amine side chains and the reducing sugar ascorbic acid (vitamin C) is responsible for the Maillard glue’s stickiness. The team investigated both bovine serum albumin – a pure protein – and less pure soy protein isolate as a protein source for the glue. While the former made for a slightly stronger glue, the latter is one of the cheapest organic polymers. ‘It’s the kind of material that could be useful when going to a Mars station,’ says Steele. ‘Soy could be used as food, for a lot of other materials and now also as adhesive. It’s also a very sustainable.’

Protein and sugar were allowed to react at room temperature for a day, applied and then cured for 12 hours at 95°C. While this creates a permanent bond under dry conditions, Román and Wilker realised that five minutes underwater dissolves the glue. Although this limits the glue to dry environments, ‘it’s interesting for cradle-to-grave concepts: put something together and find a way to take it apart at the end of its life cycle’, explains Steele.

Wilker’s glue could replace plywood adhesives, which often contain formaldehyde. The carcinogenic chemical off-gasses from furniture and contributes to formaldehyde levels in homes. The glue could also be suitable for food packaging, Wilker says, since it is – at least in theory – edible. ‘But we haven’t had anyone in the lab brave enough to taste test it yet,’ he laughs.