It may seem like a bit of a stretch, but scientists in the US have designed a protein crystal sheet that thickens when it is stretched and shrinks when compressed. 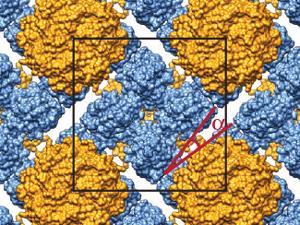 From elastic bands to pizza dough, most man-made materials tend to thin as they are stretched. The opposite is true when they are under compression, with material flowing away from the source of pressure and expanding in the opposite direction.

Scientists describe this effect using Poisson’s ratio, a term that compares the strain in the plane of an applied force to the transverse strain. In the case of elastic bands, dough and a whole host of other materials, the ratio is positive.

But there are cases when this ratio is negative and a material will shrink as it’s compressed – a peculiar property known as auxeticity. ‘When an impact hits a normal material, all the material density flows away from it, but in a material like this, when an impact hits, all the density flows into the point of impact,’ says Akif Tezcan from the University of California, San Diego. ‘They would be good at shock absorption and dissipating sound.’

Tezcan and his colleagues have now made such an auxetic material at the molecular scale. The 2D lattice sheet is comprised of modified aldolase tetramers with cysteine linkers anchored at each of the four corners. Once oxidised, disulfide bonds form between the linkers and allow the proteins to self-assemble into a tiled porous lattice sheet.

But the team quickly noted the lattice is not static. ‘We took snapshots of these crystals and what we saw is that they actually come in multiple different conformations,’ Tezcan explains. ‘That suggested to us there’s actually a continuum of motion.’

Due to the flexibility of the disulfide bonds, the tetramers can rotate within the lattice, forcing the pores to close and a reduction in surface area. Such behaviour suggests the lattice has a Poisson’s ratio of -1, as any decrease in length in one axis is matched by an equal decrease in the other. Likewise, as the protein tiles rotate back to their original position, the pores open up and the sheet’s two dimensions increase equally.
Tezcan’s group now intend to increase the sheet size and probe this exotic property further. ‘Our task is to actually take this into the macroscale,’ he says. ‘We want to actually be able to take a protein lattice and stretch it.’

‘What is particularly fascinating is that the extent of auxeticity of this man-made material could even surpass that measured in natrolite, nature’s own nano-scale crystal with the “rotating squares” motif,’ says Joseph Grima from the Univeristy of Malta. ‘It also confirms that through molecular design, we can now be much closer to synthesising novel materials … with tailor-made Poisson’s ratio properties.’