Rosa Biotech gets biosensors on the nose

The human nose can distinguish at least a trillion different odours, thanks to around 400 types of scent receptors. Whenever the smell of coffee wafts through a room, or when we sense the aroma of freshly cut grass, a system of interconnected receptors and neurones send signals to the brain, which recognises and interprets the pattern and its meaning. 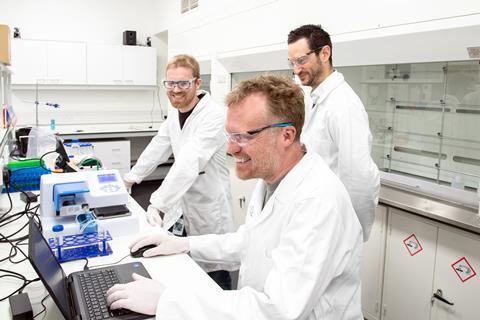 A biosensor works similarly. The devices can detect the presence or concentration of analytes such as biomolecules, biological structures or microorganisms. Biosensors typically consist of three parts: a component that recognises the analyte and produces a signal, a signal transducer, and a reader.

Most biosensors, however, can only bind a single analyte, limiting their ability to detect different odours. Rosa Biotech, a spin-out from the University of Bristol, UK, has developed biosensing technology that mimics mammals’ olfactory system to work more like an electronic nose. The sensors bind to a huge range of analytes and, as such, detect various combinations of molecules and odours.

The technology is based on α-helix barrels engineered from peptides. The self-assembling, hyperstable molecules can be designed in an almost infinite number of variants, each of which displays different binding affinities. ‘The clever bit is how you design the amino acid sequences,’ which bundle together and form the barrels, says chief executive Andy Boyce. ‘Based on the number of α-helices you design, by changing the amino acids in the barrel, it changes the hindrances, charge profile and its affinity for a range of different molecules.’

Rosa engineers its sensors by combining the peptide barrels with fluorescent, hydrophobic dyes. ‘We introduce analytes across different barrels, and they essentially compete [to displace] the dye in the centre of the barrel,’ Boyce explains. Because the dyes fluoresce inside the hydrophobic environment of the barrel, but not on the outside, it produces a fluorescence profile for each barrel or analyte. ‘We can take that profile and plug it into our machine learning algorithms and use it to make commercial and clinical predictions,’ says Boyce.

Rosa can tweak the peptide barrels to be more sensitive to specific applications and different sets of molecules. However, the same set of barrels can be used for applications as diverse as pharmaceutical diagnostics and whiskey tasting – in an informal test, the team pitted the sensors against investors to distinguish cheap and expensive brands of whiskey, Boyce recalls. The sensors won by a landslide. That versatility is not surprising, says Boyce: ‘We don’t have a different nose for different occasions either!’

In 2019, Rosa was one of eight winners of the RSC’s Emerging Technologies competition. Now, the team is working to develop a much larger set of barrels and make the system more sensitive and adaptable. ‘There could be a case for using different sets of barrels for different applications,’ Boyce says. ‘Some applications might need specificity for certain types of analytes.’ 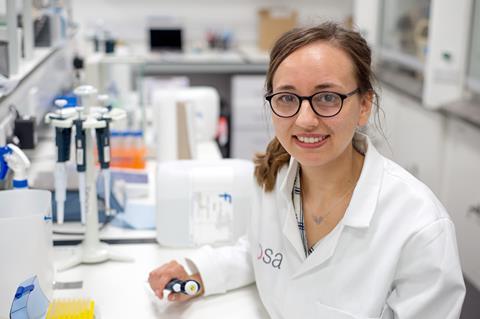 Rosa’s approach has opened up the possibility of solving biosensing challenges that were previously regarded as too complex, time-consuming or expensive to address at scale. The team is working to commercialise an assay to improve the yield of biological drug production. The system can help examine materials used during the process and optimise the manufacturing conditions. This saves money, as small errors in the feeding and growing of cells can mess with a batch and impact productivity. A perceptive biosensor can potentially save millions in manufacturing costs through reduced waste and and increased product yield.

In parallel, the spin-out is collaborating in a University of Bristol project that aims to assist in the Covid-19 crisis. Biosensors could be involved in detecting or diagnosing the virus, or in optimising treatments for patients, Boyce suggests.

Nose to the grindstone

Further down the line, Boyce ­– who has a PhD in cancer research – would like to see the biosensors applied in oncology. ‘We would never be looking at the level of detecting a single cancer cell or mutational change in a cell,’ he predicts, ‘but we could potentially look at meta changes in patient samples, or at detecting an early metabolic alteration in a person.’

For now, the company is trying to maintain its funding to continue the work. ‘Covid-19 threw a spanner in the works for people starting companies and changed the dynamics of the funding landscape,’ Boyce says. ‘Our investors have been very supportive but we’re still waiting to see what impact it will have on us.’ Rosa is still operating expensive laboratory and pilot-scale tests. In parallel, the team is trying to convert industry collaborations into funded commercial projects.

In the longer term, Boyce hints that further investment will be necessary before the company can bring the biosensors to market. The next stage will involve comprehensive pre-clinical testing, he says, with the eventual goal being regulatory certification.

Origin: Spin-out from University of Bristol