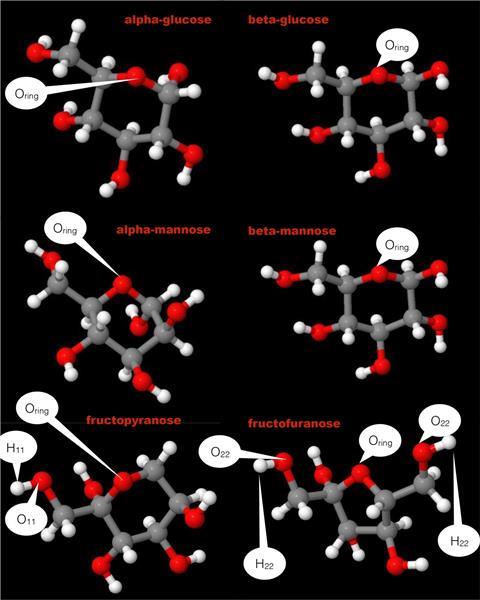 Humans recognise sweetness thanks to receptors in their taste buds that interact with saccharides. But although all monosaccharides have similar molecular structures, fructose is perceived as sweeter than glucose, while mannose is almost tasteless with a bitter aftertaste. The reason for this puzzling fact is that small differences in stereochemistry change the way the molecules interact with water, Maria Antonietta Ricci from Roma Tre University in Italy, and her team have now found.

Like all solutes, glucose, fructose and mannose disturb the structure of bulk water when they dissolve in it. But it is not these geometric changes that affect their taste. Instead, Ricci’s neutron diffraction experiment showed that the average length of the hydrogen bonds between the sugar and the surrounding water is the key to sweetness: while fructose hydrogen bonds are around 1.8Å, mannose’s bonds are much longer and weaker, 1.95Å on average. The disaccharide trehalose with its 2.05Å long hydrogen bonds is even less sweet.

Although Ricci’s experiments were done in water rather than in a biological system, the team thinks that the same hydrogen bond differences also come into play when the sugars bind to taste buds’ sweetness receptors.