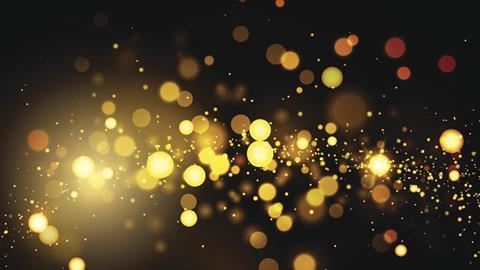 Tiny semiconductor crystals called quantum dots have been used for the first time to photocatalyse several carbon–carbon bond forming reactions, rivalling – and in some cases surpassing – the performance of expensive precious metal catalysts.

Photoredox catalysts can perform reactions under milder conditions, lower temperatures and quicker than classic redox chemicals. Moreover, researchers can ‘obtain products they might not get with more conventional synthesis’, explains Paola Ceroni, an expert in photochemical nanosciences at the University of Bologna, Italy, who wasn’t involved in the new research. However, common photocatalysts are based on rare and expensive metals like ruthenium and iridium. Researchers have tried to replace them with more abundant metals or organic molecules, but with limited success so far.

Todd Krauss and Daniel Weix and their team from the University of Rochester, US, have now introduced a promising new player to the field of photoredox catalysis: quantum dots. These nanosized semiconductor particles have been used to capture sunlight in solar cells and their brilliant colours have found application in commercial displays like that of Amazon’s tablet computer the Kindle Fire. But quantum dots can also convert light energy into reducing electrons, making them ideal photoredox catalysts, as Krauss and Weix have now shown for the first time. 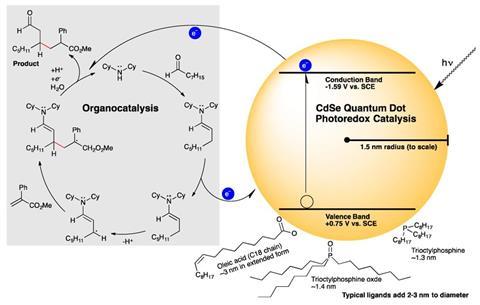 Quantum dots can turn light energy into reducing electrons to catalyse reactions. Now they have, for the first time, been shown to be able to catalyse a number of carbon–carbon bond forming reactions

The researchers used cadmium–selenium dots 3nm in diameter to seamlessly replace iridium and ruthenium catalysts in five different bond forming reactions including β-alkylation and β-aminoalkylation. What’s more they needed orders of magnitude less catalyst than conventional metal ones. ‘We were pleasantly surprised by the level of performance by just substituting, without any optimisation, a very simple quantum dot into these reactions,’ says Krauss.

The dots have some other advantages: they are easy to synthesise, cheap and ‘you can tune the photophysical and redox properties of the catalyst just by changing the dots’ dimension’, Ceroni explains.

The Rochester team wants to increase the dots’ performance further and plans to study different types of dots and their ligands, which could potentially allow stereoselective reactions. ‘What I would like to see in the future is a more detailed study of the photochemical mechanism in order to better design the next generation of photocatalyst,’ Ceroni adds.

Krauss and Weix are in the process of patenting their quantum dots catalysts, which could have a bright future in industry. ‘[Industry] can use one catalyst for potentially several reactions – saving time and cost,’ Krauss concludes.