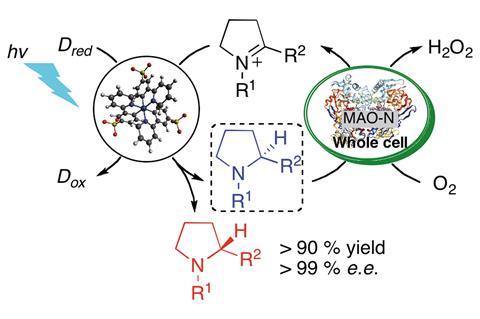 Researchers in Switzerland have successfully introduced cyclic enzymatic chemistry into a photochemical reaction to perform an enantioselective imine-to-amine reduction. The concept could act as a springboard for introducing more control into light-induced transformations.

A purely photochemical imine reduction would result in a racemic mixture of amines. Now, a team led by Oliver Wenger and Thomas Ward at the University of Basel, has incorporated the enzyme monoamine oxidase into such a reaction so that it only produces the R-enantiomer. The enzyme makes the reaction enantioselective by converting any S-enantiomers in the mixture back into the imine, ready for the reaction to proceed again.

Combining photoredox catalysts and enzymes can be difficult because the two tend to require completely different solvents. The fact that monoamine oxidase works best in water pushed the team to develop a water-soluble iridium photosensitiser, contributing to the green chemistry credentials of the research.

‘Normally you rely on aggressive chemicals to encourage reactions like this,’ comments Wenger. Here they use a mild chemical, ascorbic acid, to induce the reaction, ‘and part of the energy that this transformation requires is light, which is a very green way of doing this reaction’.

Another ‘challenge was the cross-talk between the enzyme and the photoredox catalyst, which can result in mutual deactivation,’ explains Wenger. ‘The enzyme doesn’t really like the catalyst and vice versa so we had to design a strategy to keep the two parts away from each other.’ Ward’s research group provided the solution by suggesting they use Escherichia Coli cells to encapsulate the monoamine oxidase enzyme to keep it apart from the iridium catalyst.

Miquel Costas, whose research at the University of Girona, Spain, includes catalysis and bioinorganic chemistry, comments that several aspects of this work are particularly remarkable because they represent remarkable solutions to methodological and conceptual challenges, and may find use in other transformations. ‘Fundamental aspects of the reaction design; the direct photoredox reduction of imines to amines is a two electron process, difficult per se because after the initial electron-injection, the resulting highly reactive carbon-centred radical must be trapped in a rapid hydrogen atom transfer process. Identifying the proper hydrogen atom transfer agent is not trivial because the rate of this reaction not only depends on thermodynamics but also on polarity matching between the two reagents.’