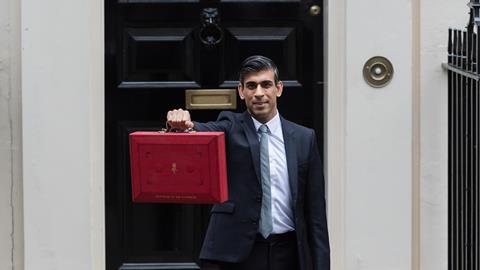 Spending on research and development will go up by £5 billion – to £20 billion – over the next three years, with funding for Horizon Europe and overseas aid research earmarked for the rest of the parliament.

While there’s disappointment in the science community that the chancellor did not meet his pledge of £22 billion by 2024–25, researchers are sanguine about the three-year settlement announced in the autumn budget, which also provides sustained growth for core science funding through UK Research and Innovation. It is set to receive £5.9 billion by 2024–25, compared with £4.8 billion this year.

‘While it’s disappointing to see the £22 billion target stretched out further [until 2026–27] it does now bring some certainty to what has been a very uncertain space, in terms of the size and shape of the overall public investment,’ says James Wilsdon, digital science professor of research policy at the University of Sheffield.

The biggest increase overall comes at the end of 2023, with spending to increase by over £3 billion in one year. The chancellor also reiterated the government’s pledge to have total public and private R&D spend reach 2.4% of GDP by 2027, but that would imply a greater contribution by the private sector.

Helen Pain, chief executive of the Royal Society of Chemistry, said the community recognised the challenging fiscal climate, but while today’s announcement ‘is a start’ more can be done. ‘We will continue to work with others in the sector to show the value that investment in R&D can bring to the UK, and continue to build the argument for prioritising R&D in future spending.’

R&D funded through Overseas Development Aid – cut heavily last year – will grow from £600 million this year to £1 billion in 2024–25. That potentially holds out the promise of some reinstatement of programmes such as the global challenges research fund, suggests Wilsdon.

The chancellor has also ear-marked spending that will be devoted to R&D in other government departments such as Transport and Defence. It rises from £2.1 billion to £4.1 billion in 2023–24. ‘That reflects a genuine, sensible attempt in policy terms to reinvest more in other bits of the public R&D systems that aren’t just university research, because that sort of R&D spending has dropped dramatically over the last 15 years,’ Wilsdon adds.

Earlier this year there was great uncertainty about funding for participation in the EU’s research programme. Now that the money is agreed, association has been held up seemingly by wrangling over the implementation of the protocol that governs post-Brexit trade with Northern Ireland. Having the funding sends a political message ‘that the firm intention at the moment is to join Horizon Europe, says Martin Smith, head of policy lab at Wellcome. ‘That’s what we’ve agreed to do, that’s what we’re planning to do and this is what we’ve budgeted for.’

But he adds that having the money explicitly ear-marked ‘also means that if we do end up having to go down a different route – and I really hope we don’t – alternative options will require a lot of money, and it will require that to happen quickly and comprehensively in a way that attempts to shore up the inevitable dip in confidence that we’ll have in this situation’.

Parliament’s European Scrutiny Committee heard that the government’s assessment is that ‘the delay is already having practical impacts and could have lasting effects on the development of the programmes moving forward’, particularly in relation to procurement for the Copernicus satellite programme.

The European commission has said that UK researchers should apply for funding on the basis association goes ahead, but they cannot receive any grants until it does. Last month, UKRI and its partners announced grants of up to £5000 to provide resources to develop collaborations with EU organisations.

The government also re-announced £800 million for the Advanced Research and Invention Agency, including £50 million this year. However, it doesn’t yet have a leadership team.