Chemists have applied the biological concept of reaction efficiency to an organometallic cascade reaction to show how spatially confining such a reaction can create catalytic cycles that would be impossible in a homogenous solution under ambient conditions.1

Reaction efficiency, γ, is mathematically defined as the ratio between product outflux and substrate influx in a one-to-one stoichiometric reaction and is a measure of how well a cascade system can keep and use intermediate species generated within a compartment. The concept stems from biology where nature channels short-lived intermediates within multi-enzyme cascade reactions in such a way to prevent side-reactions and generate high yields of complex natural products. 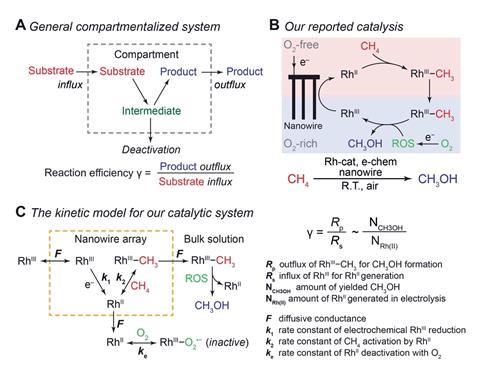 Compartmentalisation, alongside self-replication and metabolism, is one of the main characteristics that distinguishes living from non-living systems. And chemists are becoming increasingly aware of how they can borrow that notion from biology and use spatial confinement to enhance synthetic reactions. In 2019, Chong Liu and his team from the University of California, Los Angeles showed how a silicon nanowire array could be used to catalytically oxidise methane to methanol under ambient conditions. The array uses electrochemistry to produce a concentration gradient of oxygen, which spatially segregates incompatible steps in the cycle by creating a local oxygen-free “mini-glovebox” and allows the reaction to proceed, despite having an oxygen sensitive intermediate. Now, Liu’s team has built a model to quantify the effect of compartmentalisation. 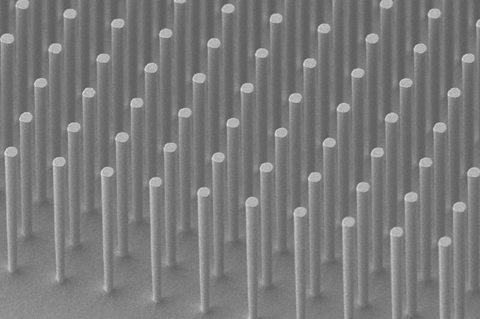 Their theoretical model required experimental data. The team therefore had to identify the predominant reactive oxygen species in the reaction by EPR spectroscopy and then, once identified as O2˙−, measure the rate at which it was generated.

Data on the reactive oxygen species saw the model come up with an overall value for efficiency exceeding 80%. Looking at the same reaction in a homogeneous solution, without a nanostructured electrode, the efficiency was almost zero.

Bioinorganic chemist Hannah Shafaat from The Ohio State University in the US comments, ‘I really liked their extension of the common biochemical metric for measuring catalytic efficiency to electrocatalysis within a synthetic system, and think this will find great utility for analysing engineered systems that perform cascade reactions in the future.’

Liu’s team said their work ‘quantitatively highlights the transformative power of spatial control at the nanoscale for new chemical reactivity.’