Reducing aldehydes can be challenging under mild, acid-free conditions, but researchers in the UK have shown how supramolecular cages can catalyse the reaction and substantially boost the yield.

The team behind the work was exploring methods for converting the aldehyde furfural, derived from sustainable biomass, into furfuryl alcohol, a valuable monomer for preparing furan resins and polymers. Existing methods are limited by undesirable side reactions or the need for strongly acidic conditions. However, this new aldehyde reduction method, developed by Mark Symes and colleagues at the University of Glasgow, works in water at neutral or even basic pH. 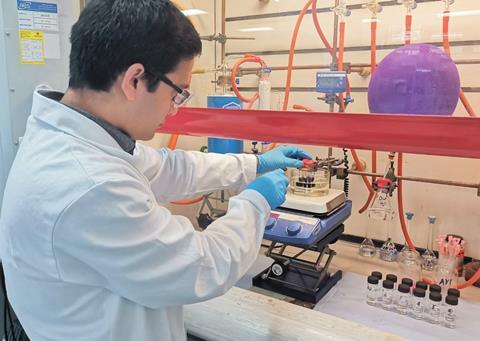 Symes, whose current research focus is electrosynthesis, says the discovery was accidental. ‘We were pretty much trying to do something else. If you just throw furfural into an electrochemical cell and reduce it, you make some products of interest, but also, you make a whole load of other junk.’

With experience of supramolecular chemistry from his PhD research, Symes was curious about the effect of the supramolecular cages on this electrochemical reduction. ‘We discovered that you don’t actually need the electrodes to do this. If we just add a really weak hydride agent [in the presence of the cage] we reduce that aldehyde without needing the electrodes and it works really well.’ 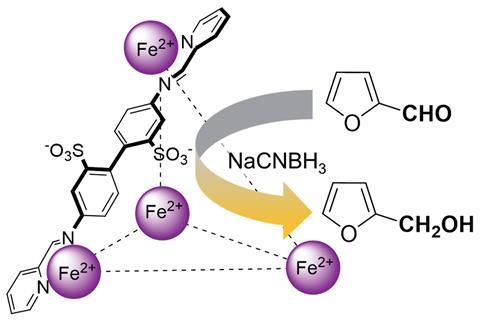 Computational studies revealed the mechanism by which nanoencapsulation drives the reduction of furfural using sodium cyanoborohydride. The cage contains aromatic and anionic groups that stabilise the protonated furfural species, a high-energy reaction intermediate, to facilitate nucleophilic attack by the hydride source. ‘There’s effectively a difference of about five pKA units,’ explains Symes. Inside the cage, a protonated furfural species is ‘stabilised one hundred thousand times more relative to one outside – that’s exactly the sort of thing that enzymes do.’ In a further parallel with enzymes, the cage demonstrates a level of substrate selectivity: the small interior volume is accessible only to small aldehydes such as furfural, whilst bigger aldehydes cannot enter the cage and do not exhibit increased reactivity.

Whilst enzymes use intricate and complex structures to catalyse reactions, the cage used here is remarkably straightforward in comparison. ‘When I’m thinking of enzyme mimicry, you have to have the confinement and all these extra functional groups from amino acid side chains, to activate your reactants,’ comments Tendai Gadzikwa, who researches supramolecular catalysis at Kansas State University in the US. ‘Seeing this drastic change in the pKA of the aldehyde was unexpected. Just using the aromaticity [of the cage] seems to be enough - that’s really simple but effective.’