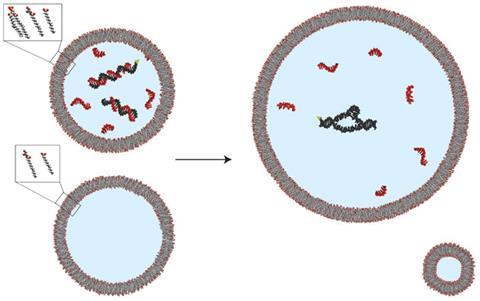 The release of a biochemical brake as its components’ concentrations dropped might have overcome the drawbacks that growth posed to cells near the dawn of life.

Jack Szostak’s Harvard University, US, team is trying to develop simple model cells that grow, divide and evolve, simulating early life, explains team member Aaron Engelhart. The scientists use spherical fatty acid vesicles for this purpose, as they can already grow and divide, and hold chemicals important for life. However, as they grow, their contents are diluted, which in turn slows down biochemical reactions, making growth a disadvantage.

‘We tried ways you might get around this by turning enzymes on as a compartment grew,’ Engelhart says. Ribozymes – RNA enzymes – could be candidates because they might have already existed, according to the ‘RNA world’ theory that RNA first carried genetic information in early evolutionary history. They also bind weakly with other short RNA strands that can put a brake on their function. Weak binding is more likely to happen at high concentrations, the team realised, but the strands come apart at low concentrations, lifting the brake.

Szostak’s team therefore enclosed a ribozyme and several other short RNA oligonucleotide strands in fatty acid vesicles. ‘Vesicles containing short RNAs and ribozyme exhibited approximately constant enzyme activity as a function of vesicle volume as the vesicle grew,’ Engelhart says. ‘Without the short RNAs, they exhibited about a 90% drop in specific activity.’

Fabio Mavelli from the University of Bari in Italy, who has also worked on protocell models, says the study is ‘very promising’ for origin-of-life research. ‘It suggests that by very basic physical processes protocells are able to self-regulate their behaviour, and this represents a step forward towards being alive,’ Mavelli says.

The study is a ‘good piece of science’ taken in isolation, agrees Pier Luigi Luisi from Roma Tre University in Italy, who has worked extensively on lipid vesicles. ‘But it says very little about the general issues of primitive cellular life,’ Luisi adds. He asks how the sophisticated RNA sequences would have been produced in the first place. ‘The idea that ribozymes have formed spontaneously is really untenable.’

While the ribozyme used is complex, Engelhart points out that the brake system is much simpler. ‘One thing we found particularly exciting is that it arises as the result of many short strands, which are easier to synthesise than long ones,’ he says.