The discolouration rate of a fluorescent dye can act as a visual marker for changes in hydrogen bonding environment, new research shows.

Colourless spiropyrans undergo ring opening to form brightly coloured merocyanines on exposure to UV light. Merocyanines are thermally unstable and relax back to the colourless spiropyrans over time. The merocyanines designed by Simone Ciampi, from the University of Wollongong, Australia, and his colleagues contain a catechol group that can form intramolecular hydrogen bonds, which stabilises the open form and slows down discolouration. However, polar solvents can out-compete intramolecular hydrogen bond formation, and speed up discolouration. In this way, Ciampi’s team were able to visualise the hydrogen bonding character of solvents by adding their dye and observing the rate at which it discoloured. 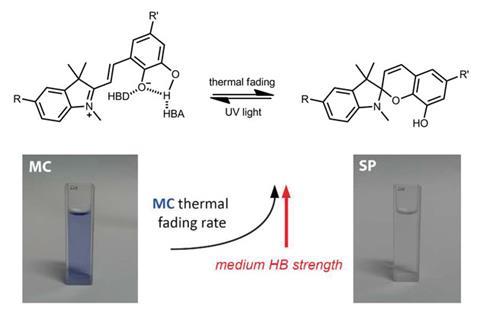 Solvent expert Robin Rogers, from McGill University, Canada, warns that this might not be as straightforward a process as it seems, as many other interactions – p stacking, for example – could lead to colour changes unrelated to hydrogen bonding, and interpretation of these scales can consequently be difficult. Ciampi agrees with this assessment: ‘Polarity scales alone cannot account for a multitude of interactions at the molecular scale. We try to stay away from conventional scales so do not use individual polarity values but rather focus on a range of these, to exclude very polar and very non-polar systems. No effort was made to link relaxation rates to individual polarity values.’

The climax of this work, according to Ciampi, was that they could observe how the hydrogen-bonding ability of a solvent changes in response to shear-stress in a fluidic device. ‘These observations are completely non-intuitive, but yet, they appear to fit with a recent observation on protein refolding under similar shear conditions using the same thin film vortex fluidic device.’ Tom Welton, whose research at Imperial College London, UK, is searching for solvents to improve chemical processes, is similarly impressed with this observation. ‘This study shows a clear, but I would have thought, remarkable observation of a shear effect reducing intermolecular hydrogen bonding relative to intramolecular hydrogen bonding in this system. I can see that it will set a hare running as people try to establish how much this extends to other systems and how it works.’