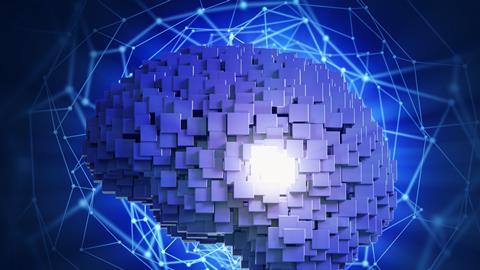 An AI equipped robotic system that enables synthetic protocells to evolve could help unravel how complex life formed on Earth. The fully automated system, which make use of machine learning, could aid understanding of other complex chemical systems too.

Oil-in-water droplets are often used as protocell models because, while chemically simple, they can exhibit complex and cell-like behaviours, such as movement and division. However, in order to work out how specific droplet properties – including viscosity, density and surface tension – result in different behaviours, droplet formulations must be varied. The problem is that the permutations are vast, even for droplets with just four ingredients.

Now, Lee Cronin’s lab at the University of Glasgow, UK, has developed a robotic platform that makes different oil-in-water droplet formulations, analyses their behaviour, and then uses evolutionary algorithms and machine learning to predict and select behaviours. It can then evolve new and improved formulations for the next generation of droplets.

Cronin says the platform could be used to see how long it takes a system to become complex enough to have multiple co-existing traits and how these might then need to ‘invent’ a better chemical memory, akin to genetic instructions, to become life-like. ‘This would help tell us how pre-living systems were able to develop something as complex as the genomic and translation machinery of life,’ explains Cronin. 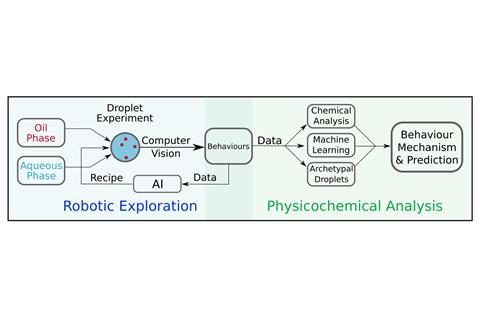 The setup uses a robot that dispenses up to six different aqueous surfactant solutions. It then mixes in four oils in varying quantities along with a dye and adds them to the surfactant solutions to form oil-in-water droplets. A camera films the droplets while image recognition software identifies, classifies and quantifies their behaviour, including movement, division and vibration.

By varying the oil and aqueous components, the team tested almost 400 random mixtures in a little under two days. Movement and division were the behaviours seen most but others included swarming, fusion, pulsing and sorting too. ‘That the droplets that were able to swarm or flock was very surprising as they had to be able to “feel” each other,’ says Cronin. ‘We suspect this is possibly due to electrostatic charging.’

With the behaviours identified, the researchers then tested the system’s ability to evolve better droplets by feeding data back to the robot via a genetic algorithm. They then ran the algorithm for 30 generations selecting for the fastest moving droplets. The end result was a droplet that was 14 times faster than its predecessors.

‘Having the entire system run autonomously was a big achievement for us,’ says Cronin. ‘It was possible to see the evolutionary process run before our eyes.’ Further analyses showed that the approach could predict droplet behaviour based on droplet composition, enabling the system to find new recipes for the rare swarming behaviour.

‘They revealed a surprising variety of different motional patterns of the droplets, which I find intriguing,’ comments Holger Stark, who studies droplet physics at the Technical University of Berlin, Germany. ‘This approach should be applicable to different chemical and physical systems.’

Cronin agrees and says materials chemists might be able to discover new materials this way. He adds that the next challenge is to make the droplets more life-like. ‘We are aiming to program the cells like a computer and also aiming to embed more complex chemistry so that a longer evolutionary run can select and yield cells that are even more life-like.’