Robotic system can plan and perform biosynthesis without human intervention 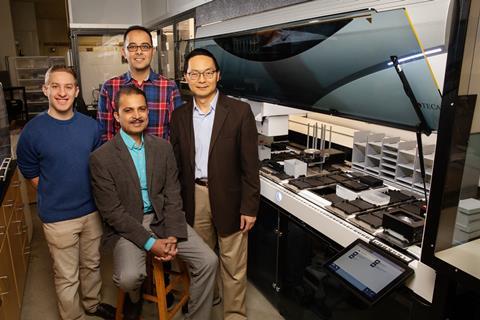 A fully automated algorithm-driven platform can not only design, build and test biochemical pathways to make valuable compounds, it can learn from its mistakes and optimise the process too.1 After the initial setup, the robotic system plans and performs all the experiments without further human participation. The new approach can be used to produce a variety of chemicals using biological engineering.

Materials developed using synthetic biology and bioengineering are important for research, medicine and industry, but biological systems are complex, so many rounds of design, build, test and learn (DBTL) are usually required. The development of biofoundries – systems that mimic factories and can produce valuable compounds by making use of biochemical pathways – has been an important step towards automating the design, build and test components of the cycle, but there are no examples of automating learning. Now, a US team has created the BioAutomata platform that can do just this.

‘We empowered a state-of-the-art robotic system for chemical manufacturing and biological experimentation with artificial intelligence (AI) for planning its experiments without human intervention,’ says Saurabh Sinha of the University of Illinois at Urbana-Champaign, US. His colleague Huimin Zhao points out that previous biofoundry efforts focused on one or two components of the DBTL cycle whereas theirs can perform all four. ‘We have demonstrated for the first time that we can close the entire cycle by combining AI and automation,’ he says. Sinha adds that the system contains an algorithm that can learn and plan new experiments as it goes. ‘We incorporated the learn component in the cycle, where the robotic system learns from its tests and gets ready to repeat the cycle of engineering,’ he says.

BioAutomata was built using the Illinois Biological Foundry for Advanced Biomanufacturing (iBioFAB), which was developed by Zhao’s team in 2014.2 ‘iBioFAB integrates more than 20 instruments with a robotic arm on a large platform and can be used to perform many different biological engineering experiments,’ Zhao says. The scientists tested their system by optimising the biosynthesis of lycopene, a red food additive and colourant found in tomatoes. Sinha explains that BioAutomata’s task was to tune the activities of three genes in the pathway to obtain the desired product. But each of the genes can be tuned to one of many different levels of activity, so there’s a huge number of possible combinations.

‘To explore this large space of possibilities, each of which can be achieved by an experiment that will reveal if it’s a productive setting, BioAutomata adopts a special algorithm called Bayesian optimisation,’ Sinha says. Using this algorithm, the new platform evaluated less than 1% of the 13,824 possibilities and was still able to outperform conventional trial-and-error strategies by 77%.

Paul Freemont at Imperial College London, UK, who was not involved in the study, says that the work demonstrates the power of new biofoundry approaches for biosynthetic pathway engineering. ‘By showing the clear advantage of using automated experimental design over random approaches for biosynthetic pathway engineering, it reinforces the emerging roles of biofoundries in synthetic biology.’

Vikramaditya Yadav of the University of British Columbia, Canada, adds that the results are an elegant demonstration of how machine learning will drive biosystems optimisation in the future. ‘The closest rival technology is George Church’s Multiplex Automated Genome Engineering, which is also a very successful method,’ he says.3 ‘The big difference is the elimination of randomness in this work.’

The researchers point out that their approach can also be applied to the production of other chemicals. ‘This strategy can be used for engineering of enzymes, pathways and genomes for basic and applied biological research, and for identifying new biological mechanisms or insights,’ says Zhao.

Yadav believes that there are exciting times ahead. ‘Machine learning is the ultimate differentiator and the prospects of computer scientists working more closely with bioengineers is salivating. We are looking at a new era of targeted, high-precision and high-throughout bioengineering,’ he says.