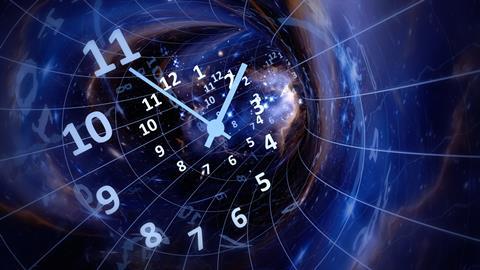 By putting a 50-year-old thought experiment about a quantum clock into practice, physicists have for the first time measured how long rubidium atoms spend inside the ‘forbidden’ barrier region during quantum tunnelling – 0.6ms. The work aims to address the controversy surrounding tunnelling time, which has seen some studies proposing finite times while others suggest the process is instantaneous.

Explainer: What is quantum tunnelling?

Tunnelling allows particles – photons, electrons or atoms for example – to appear on the far side of a potential energy barrier they don’t have enough energy to surmount. While the phenomenon plays an important part in processes like nuclear fusion in the sun and even plant photosynthesis, its details remain mysterious. For decades, scientists have been trying to determine how long it takes a particle to travel through a barrier – an endeavour that has proven divisive. Some scientists suggest tunnelling takes a few attoseconds, others say it is instantaneous, meaning it is faster than the speed of light.

This is because time on a quantum scale can’t be observed directly, so scientists have to come up with a workaround. One of the most famous experiments, the attoclock, deduces tunnelling time by measuring the angular momentum of electrons kicked out of an atom by an elliptically polarised laser. But the experiment has to make some assumptions about when the tunnelling process starts. Some theoretical calculations find that the measured momentum is in fact due to – either in part or entirely – other effects that have nothing to do with tunnelling time.

Now, a team around Ramón Ramos at the University of Toronto, Canada, has determined ultracold rubidium atoms’ tunnelling time – and it’s not instantaneous. This is the first direct measurement of how long such massive particles spend inside a barrier, Ramos says. To do this, the researchers put a half-century-old thought experiment, called the Larmor clock, into practice.

They created a potential energy barrier using a laser beam whose electromagnetic field repels the atoms’ dipole. Then, about 8000 rubidium atoms are cooled to so close to absolute zero that they can’t overcome the barrier by classical means – their only means of escape is to tunnel as they are pushed towards the barrier with a magnetic field.

A pair of Raman lasers serves as the clock in the experiment. While the atoms are inside the barrier, and only then, the laser field rotates their spin. Knowing the atoms’ spin state before they enter the barrier and measuring how far it has rotated after exiting is like having a tunnelling stopwatch, explains Ramos. When moving at 4.1mm per second, the atoms spend 0.6ms inside the 1.3μm-thick laser barrier.

‘From my point of view, our experiment is fairly clean, fairly simple,’ says Ramos. ‘I think that it helps settle this question that has been a little bit controversial.’

‘I immediately thought that it was a very beautiful experiment that should end up in quantum mechanics textbooks,’ says Olga Smirnova, who leads the strong field theory group at the Max Born Institute in Berlin, Germany. ‘In my view, this work has established without any doubt that when a quantum system with an internal degree of freedom – an internal clock – approaches the quantum barrier and tunnels through it … the clock will tell you that, indeed, it was ticking when tunnelling took place.’

Cornelia Hofmann, who researches attosecond strong-field electron dynamics at University College London, UK, says the idea of building a Larmor clock quantum simulator is ‘really interesting’. While the study doesn’t necessarily resolve the controversy surrounding attoclock measurements, which is specific to its setup, ‘the Larmor clock predicts a certain [tunnelling] time, which is comparable to what measurements on the attoclock have yielded’, she adds.

Even with the Larmor clock, there is a catch, Smirnova says. ‘If the same quantum system would approach a symmetric barrier and, instead of tunnelling, would get reflected from it, the internal clock would measure the same time, as was theoretically shown by [the study’s co-author] Aephraim Steinberg earlier.’

Apart from satisfying curiosity, there are practical implications to having a better understanding of quantum phenomena, explains Hofmann. Processes that involve tunnelling include electron–hole pair movement in semiconductors, artificial photosynthesis and laser-induced electron diffraction, which is used to resolve protein structures.