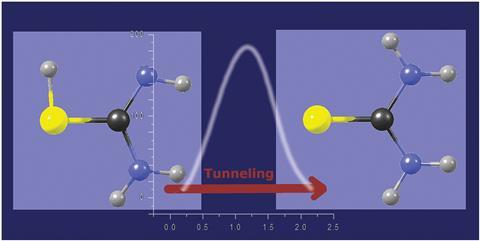 Scientists in Poland have confirmed that spontaneous thiol to thione hydrogen-atom transfer takes place in thiourea isolated in low-temperature matrices.1 Building on their earlier work on proton tunnelling in thiourea isolated in an argon matrix,2 Maciej Nowak and colleagues at the Polish Academy of Sciences have now investigated how matrix media and temperature influence the tunnelling rate.

In 2003, Nowak’s team surprised even themselves when they reported ‘the experimental observation of the spontaneous long distance [~2Å] transfer of hydrogen – due to tunnelling – through a relatively high potential barrier’. ‘We found such an unexpected phenomenon in thiourea by accident,’ he says. However, Nowak became concerned that people did not believe in their experiment. Now, with an improved experimental setup, Nowak’s team have corroborated their earlier observation.

Hydrogen-atom tunnelling plays a key role in various physicochemical processes. In matrix-isolated molecules, only a moderate potential energy barrier needs to be crossed for a conformational transformation by hydrogen-atom tunnelling. Barriers for bond-breaking and bond-forming tunnelling transformations are significantly higher, especially in systems without hydrogen bonding, as in the present study; these have rarely been reported.

Nowak’s team first generated the thiol tautomer photochemically from the initial thione form by irradiating the matrix with UV light. Thiol slowly converted back into the thione form in the dark at 3.5K. The researchers concluded that crossing such a high potential-energy barrier at such a low temperature is only possible through hydrogen-atom tunnelling. The long timescale for this process, on the order of tens of hours, meant that the researchers could track the conversion using infrared spectroscopy.

The rate constants measured for the conversion in different matrices (solid Ar, Ne, n-H2 or n-D2) did not differ by more than a factor of two, indicating its intramolecular character. The tunnelling rate was temperature-independent between 3.5 and 15K, which is significant: when tunnelling occurs through a relatively low barrier, ‘the effect of temperature is observable, but for high barriers the temperature effect should be negligible,’ explains Nowak.

‘As this type of tautomerism is closely related to keto-enol and other important tautomeric equilibria, the work implies that such phenomena may actually not only be widespread but of greater importance than generally assumed,’ comments Peter Schreiner, who investigates quantum mechanical tunnelling at the University of Giessen in Germany. ‘The notion of tunnelling through a high but narrow barrier is particularly important as this defies kinetic control that would dictate that no reaction should occur. I expect many more incidences of tunnelling for even the simplest of reactions.’