A long time ago in a galaxy far, far away: oxygen 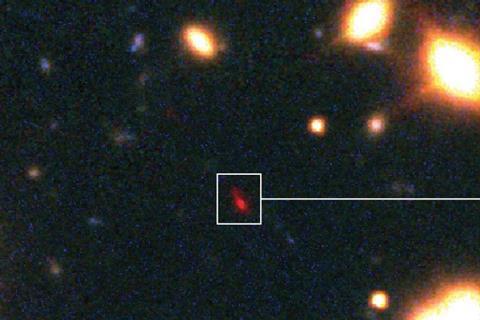 The spectroscopic signature of the most distant – and therefore oldest – oxygen atoms observed yet have been detected coming from a galaxy 13 billion light years away. Observed by the Alma radio telescopes in Chile’s Atacama desert, the spectral lines are evidence of some of the earliest star birth activity after the big bang.

Since oxygen is forged by fusion inside stars, it takes several generations of stars to generate enough of the element to make it detectable on Earth today. However, exactly when the first stars were born after the big bang more than 13.77 billion years ago has remained a matter of debate.

Because of the enormous distance the light – emitted from doubly ionised oxygen – had to travel, the observation also lets scientists look back in time: it shows the galaxy as it appeared when it was only 500 million years old – only 4% of its current age. The ancient emission lines are evidence of the birth of the first stars just 250 million years after the big bang, 350 million years earlier than a previous study looking at distant oxygen.