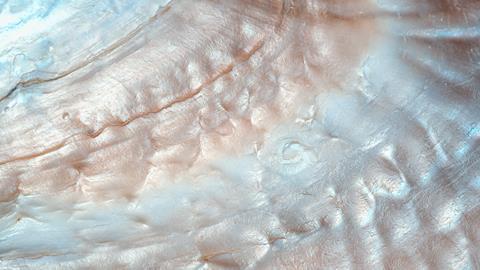 While glass is hard, durable and has many desirable optical properties, it is brittle and smashes easily. Nacre however, also known as mother-of-pearl, a substance produced by some molluscs is at once deformable and tough and a new nacre-like glass that copies the structure of the natural material outperforms both laminate and tempered glasses.1

The key to its performance is nacre’s 3D brick wall microstructure consisting of polygonal mineral bricks stacked in a staggered arrangement and held together by biopolymers. ‘If you try to deform nacre instead of cracks developing, all the bricks slide on one another,’ explains Francois Barthelat, associate professor at McGill University and one of the developers of the new material. As the bricks slide the adhesive holding the tablets is deformed and dissipates energy. ‘If all the bricks slide on one another there is a huge volume of adhesive being deformed and huge amounts of energy dissipated, and this is what we duplicate.’

Design and fabrication of the nacre-like glass panels

To mimic nacre using glass, a focused pulsed laser beam engraves the contours of the bricks onto 220µm thick borosilicate glass sheets. Next, five layers of these sheets are laminated with 25µm thick ethylene-vinyl acetate in a staggered way so the bricks separate in an arrangement akin to nacre.

During impact tests the team was surprised to find the nacre glass was two to three times more impact resistant than other glasses. ‘We were expecting some improvement, but we didn’t think we would outclass tempered glass,’ says Barthelat. Micro CT scans proved this performance was due to the sliding mechanism and not some other property. ‘There are lots of artificial nacre’s in the literature but very few actually achieve tablet sliding.’ 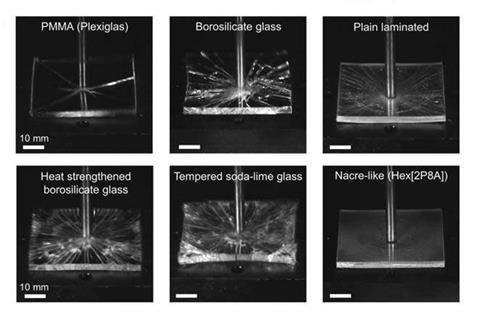 Impact tests on the new nacre-like glass revealed it was tougher than a range of glasses, even tempered glass

For Kyriaki Corinna Datsiou, research fellow at the University of Nottingham and author of an accompanying perspective2 one thing to watch out for, however, is the reduced stiffness. ‘The major limitation of synthetic nacre glass is its reduced stiffness compared to common laminated glass,’ she says. This undermines the product’s usefulness in load bearing applications. Furthermore, because polymeric interlayers are sensitive to environmental ageing and the stiffness is reduced, ‘the interlayer’s response is expected to have a higher impact to time and temperature changes’. Therefore, there is a need for long-term performance tests following prolonged exposure to environmental and mechanical loads. With further certification and product development, she says, ‘nacre glass could open up possibilities for its use in applications where impact resistance is highly desirable’. Car windscreens and blast resistant safety materials are possibilities, and it could even be used to make tougher touchscreens.

Barthelat says that using nature as a starting point is an important step on the road to developing materials with real world applications. ‘We need to go through the phase of understanding the material because what we do is bioinspiration, not copying.’ Now the team has a blueprint for building the microstructure using different materials, which can be further optimised.