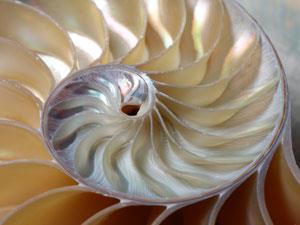 This week, get yourself glowing with Helen Scales.

It’s well known that the pearls found inside mussels, oysters and other molluscs owe their gleaming iridescence to mother-of-pearl, known also as nacre. Molluscs use nacre to protect themselves from parasites and bits of irritating grit that find their way into their shells; they smother invaders in thin layers of nacre, turning them into smooth, harmless orbs. 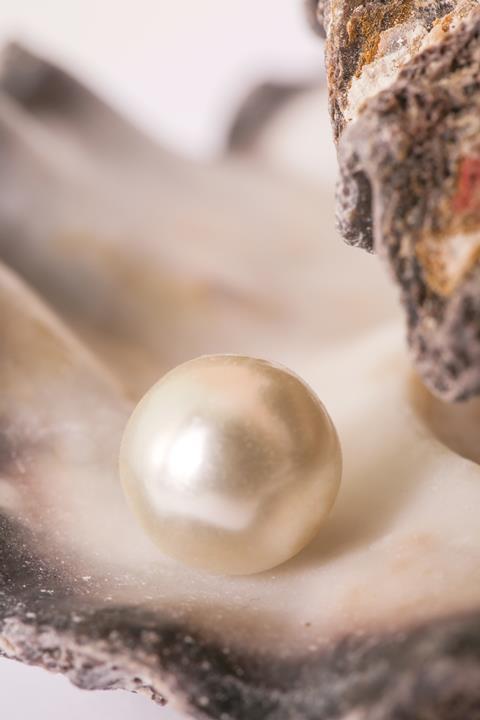 But that’s not all nacre does.

As well as making pearls, this shiny stuff is also the secret behind another great feat of nature: it’s because of nacre that seashells are very difficult to smash.

Next time you find a seashell, peer inside it and chances are you’ll see a layer of nacre. Many molluscs line their shells with nacre; it’s where chambered nautiluses get their other common name, the pearly nautilus.

They all do it not to look pretty, but to make their shells crack-resistant. If a mollusc is attacked by a crab’s claws or fish’s jaws, cracks will most likely begin to spread through the outer shell, composed of a chalky, prismatic form of calcium carbonate. But the cracks will stop when they reach the inner layer of nacre, also made essentially of calcium carbonate – the key difference is nacre’s unique inner structure.

At a nano-scale, nacre is comprised of diamond-shaped crystals of calcium carbonate stacked like bricks into thin layers between 300 and 500 nanometres thick; this happens to be just the right dimension to interfere with wavelengths of visible light, causing it to bounce around and making nacre shimmer. Between these layers is ‘mortar’ made of a protein called chitin.

When a crack begins to form in nacre, it veers off on a winding path between these layers, losing energy as it goes and soon coming to a halt. The bricks slide over each other and the chitin stretches a little, enhancing the dampening effect on growing cracks.

The ultra-thin layers are also slightly wavy, adding to nacre’s super-strength. Mohammed Mirkhalaf and Francois Barthelat from McGill University in Canada mimicked this using a laser to etch wavy lines into glass microscope slides. They showed that glass can in fact be made stronger by scratching it.

Some molluscs make their entire shells in a similar way to nacre. Windowpane oysters, also called capiz shells, were used for centuries in Asia to make windows and now are made into lampshades and tea light holders. Like all seashells, they are made mainly of calcium carbonate but theirs is laid down in layers of elongated hexagonal crystals, rather like nacre.

A research team at MIT led by Christine Ortiz has scrutinized the strength of windowpane oysters, bashing them with diamond-tipped hammers then inspecting the damage. The crystals underwent complex behaviours, stretching and flexing in such a way to set up a ‘no go’ buffer zone that cracks are unable to cross.

With a growing understanding of the immense strength of seashells, it shouldn’t be too long before mollusc-inspired materials start appearing in the human world.

In recent years, researchers have made headway, producing artificial nacre using a variety of ingredients. At ETH Zurich in Switzerland, Lorenz Bonderer and colleagues made nacre-like composites from plates of aluminium oxide coated in chitosan (made by treating crab and shrimp shells with sodium hydroxide.) A team from the UK’s Manchester and Leeds Universities used polystyrene and calcium carbonate to make ceramics that could eventually be used in building materials and bone replacements. 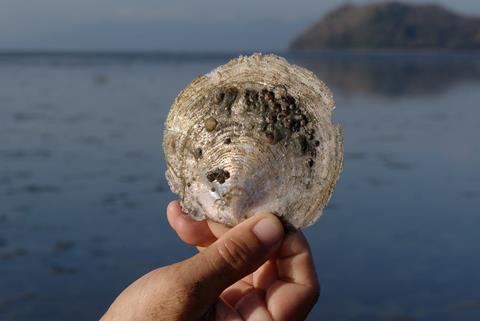 And in 2012, a group at the University of Cambridge produced the first nacre the way nature intended. The team mimicked the steps that molluscs go through to make nacre; they produced thin layers of calcium carbonate then sandwiched them between sheets of protein. The end result is a piece of nacre that looks and feels just like natural mother-of-pearl.

Imitating nacre and windowpane oysters is helping to produce the next generation of crack-proof ceramics, which could eventually turn up in aircraft, military tanks and body armor, car windshields and even spacesuit helmets.

And now that people can make artificial nacre it means – theoretically, at least – that we could start producing pearls of our own, entirely from scratch. But after centuries of extracting gems from the natural world, we’ll probably just keep getting molluscs to make them for us.

Science writer Helen Scales, extracting some pearls of wisdom there, with the chemistry of nacre. Next week, the many faces of calcium hydroxide.

“Milk of lime” refers to its state before drying, when it is also known as limewater. “Hydrated lime” merely describes its formation by adding calcium oxide to water, while the rather entertaining “pickling lime” shows up one of its less well known uses. Throw in builders’ lime, lime cake, slack lime and choona and you can see that this is etymological feast.

Continue the feast with Brian Clegg in next week’s Chemistry in its Element. Until then, thank you for listening, I’m Meera Senthilingam.