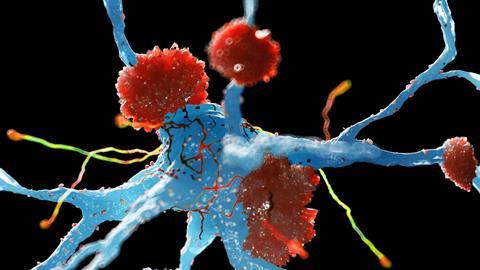 Second Alzheimer’s antibody approved in the US

Biogen–Eisai’s lecanemab can slow disease progression a little, but at significant cost and risk of side effects

A second anti-amyloid antibody treatment for Alzheimer’s disease has been approved by the US Food and Drug Administration (FDA). Biogen and Eisai’s Leqembi (lecanemab) has been granted accelerated approval, and clinical trial data show it can slow progression of the disease, but clinicians have made it clear that the drug is not a cure.

Trial data for lecanemab were significantly more convincing than for Aduhelm (aducanumab), Biogen and Eisai’s first anti-amyloid antibody, which was somewhat controversially approved by the FDA in June 2021 (against independent expert advice) but has so far failed to convince healthcare providers to embrace its use.

With headline results having been released to the press in late September, the companies’ presentation of full trial results for lecanemab at November’s Clinical Trials Alzheimer’s Disease (CTAD) meeting in San Francisco, US, was enthusiastically received. ‘This is a huge advance,’ says Laura Nisenbaum, head of drug development at the Alzheimer’s Drug Discovery Foundation in New York, US. ‘It is the first highly successful phase 3 trial readout for Alzheimer’s.’ But the excitement is partially shaped by past failures. The impact of lecanemab on patients is modest: in an 18-month trial, disease progression was slowed by around 27%.

Clinicians and researchers, though, say the drug will be challenging to put into clinical practice. The antibody must be administered by intravenous infusion every two weeks. And while lecanemab’s safety profile compares favourably to similar antibodies, there are significant side effects. These include inflammation of blood vessels in the brain, which means patients should be monitored by magnetic resonance imaging (MRI) every three months. Healthcare providers will have to decide whether the modest benefit to patients justifies those costs and risks.

Lecanumab works by removing beta-amyloid protein deposits from the brain. Dozens of drugs that targeted amyloid have failed, and some neuroscientists urged their colleagues to move on. ‘This drug works, which is great news, but it is not a magic bullet,’ says John Hardy, a geneticist at University College London (UCL), UK. ‘But this is a reset for the whole field. Even if improvements were modest, it says amyloid therapies work.’

This could be good news for the many other pharma companies with their own amyloid-hitting antibodies. But Nisenbaum cautions that lecanemab’s success may not translate to other antibodies. ‘When you study one anti-amyloid therapy, you truly have studied just one,’ she says. ‘Each molecule is different and has different chemical properties.’ The success of lecanemab was partly attributed to its targeting smaller, soluble clumps of amyloid, rather than the more densely aggregated plaques.

This is a reset for the whole field. Even if improvements were modest, it says amyloid therapies work

Indeed, in November, Roche confirmed that its antibody, gantenerumab, had failed a phase 3 study, removing amyloid less effectively than expected, and providing no significant clinical benefit. ‘We predicted in a review that gantenerumab, which is one of the slower clearers, would not show benefit in clinical trial,’ says Bart de Strooper, a neuroscientist at UCL. We don’t yet understand exactly how these antibodies clear amyloid, he adds, but it takes time before the levels can be sufficiently lowered for any clinical benefit to show.

There is, however, cautious optimism amongst many Alzheimer’s researchers about donanemab, an Eli Lilly antibody. The company revealed recently that donanemab performed better than Aduhelm in reducing brain amyloid levels in a head-to-head trial. Donanemab also reduced levels of tau, a protein inside neurons that in a tangled, insoluble form is associated with Alzheimer’s. Results from a phase 3 trial of donanemab are expected in late Spring 2023.

Neurologist Andrew Budson at Boston University, US, is excited by a reduction in tau that was also revealed during the lecanemab presentation at CTAD. ‘That this monoclonal antibody directed against beta-amyloid [also] reduced tau suggests that it must be changing the underlying biology of the disease,’ he says. ‘It is also one of the first direct pieces of evidence for the amyloid hypothesis, and that amyloid is involved in the over-production of tau,’ a suspect in neuronal death.

Not all are as enthused by the results, nor its implications for future directions. ‘This study was [well] controlled and able to spot a really small effect,’ says George Perry, a neuroscientist at the University of Texas at San Antonio, US. ‘Nobody improved. That is key.’ If amyloid was a cause of the disease, then removing the plaques should make patients better, adds Perry. In his view, modulating amyloid could have some benefits but it is not going to reverse the disease.

This is a first step. We can do better

He is also concerned about side effects, noting that there were two deaths among patients who received the treatment. Perry worries that there is likely now to be a range of ‘me too’ drugs, and ‘another 10 to 20 years of wasted time’ hitting amyloid, rather than trying to understand the disease better.

Indeed, the results are likely to reinvigorate amyloid-targeting therapies. ‘Once we’ve proven this approach works, then we can get other drugs that can be safer, more efficient, easier to administer and more cost-effective,’ says Budson. Eisai is also working on a subcutaneous formulation, and the donanemab trial envisions an end to infusions once the plaques are cleared from a patient.

The community agrees that other disease targets should be pursued. Reducing tau tangles, dampening inflammation or rekindling disrupted energy generation in neurons are all promising avenues. Hardy turns to an aviation analogy. ‘Who would have believed when the Wright brothers flew that converted bicycle on a North Carolina beach that we’d now have jet engines,’ he says. ‘This is a first step. We can do better.’