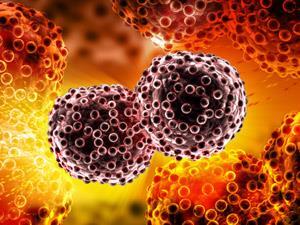 An electrochemical sensor that can detect specific mutant nucleic acids from cancers in blood samples could allow quick and cheap ‘liquid biopsies’. Developed by scientists in Canada, the sensor could make it easier to find out which treatments are most suitable for a particular patient’s cancer, and may help with initial diagnosis and treatment monitoring. The research could help deliver on the promise of personalised medicine, allowing cancer patients to have their treatment tailored to their tumour.

Personalised medicine is perhaps the most exciting new frontier in cancer treatment, potentially being more effective, and with fewer side-effects, than conventional treatments. For example, mutations in the Kirsten rat sarcoma-2 virus (KRAS) gene, which is associated with lung, colorectal and ovarian cancers, confer resistance to several common cancer treatments, and knowing which mutation a patient has could help doctors administer the best drug for their cancer. However, obtaining samples of solid tumour tissue is often difficult and tends to be invasive and painful.

Mutant DNA from the breakdown of cancer cells is known to be present in the blood of cancer patients, opening up the possibility of using simple blood tests to select an appropriate treatment and monitor its progress. However, the mutant DNA makes up only a small fraction of the total DNA present. Processing and sequencing these nucleic acids is still prohibitively expensive and can take two to three weeks for the results to come through. Polymerase chain reaction (PCR), the standard method for amplifying DNA, can also deliver an incorrect result as some DNA sequences are amplified more efficiently than others.

Shana Kelley and colleagues at the University of Toronto, together with a researcher at Montreal Children’s Hospital in Quebec, have developed an electrochemical sensor for detecting selected mutated nucleic acids. The sensor comprises gold electrical leads deposited on a silicon wafer, with palladium nano-electrodes. They functionalise these electrodes with a peptide nucleic acid that sticks to the target nucleic acid. The binding of the negatively-charged nucleic acid is then detected as a decrease in the nano-electrode’s electrical potential.

The researchers functionalised the electrode tips with a peptide that would bind to nucleic acids containing the most common KRAS mutation. They then exposed the sensors to a solution containing the mutant KRAS nucleic acids, normal nucleic acids and six nucleic acids with rarer mutations in the same gene. After 15 minutes, the researchers found that, in the presence of the nucleic acids with the target mutation – even at concentrations as low as 1 femtogram per microlitre – the potential dropped significantly. In a control solution without this mutation, no significant change occurred. They also showed that, when functionalised with a different peptide, the nano-electrodes could detect mutations in the BRAF gene associated with melanoma.

Next, the researchers tested their sensor on purified nucleic acids isolated from real serum samples from 16 patients with either lung cancer – for the KRAS test – or melanoma – for the BRAF test. In both cases, their electrochemical method gave the same results as the standard PCR test. Finally, they tested raw serum samples – something PCR is unable to do – and found that their electrochemical method was still effective. ‘We should now go out and test many more samples to show that our approach is really robust, and I would like to expand the panel of sequences that we’re looking at to show that this is a versatile approach,’ says Kelley. ‘We’ll be doing both of those things as next steps.’

‘It’s really a breakthrough,’ says tumour biologist Klaus Pantel at the University of Hamburg, Germany. ‘I was totally astonished to hear how quickly this technology can work – particularly on unpurified samples.’ If the results prove robust, he hopes the process might one day be developed beyond testing for drug susceptibility into treatment monitoring or even screening of apparently healthy patients. However, he points out that the increased death of healthy cells during chemotherapy or radiotherapy increases the amount of unmutated nucleic acids in the bloodstream, which might complicate treatment monitoring by making mutant nucleic acids harder to detect. ‘The holy grail is can it be used to detect cancer not detectable by other means?’ he wonders.