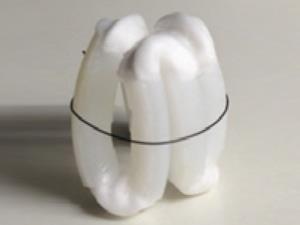 Hard to swallow? The 3cm elastomer ring can be inserted into a gelatine capsule just 18mm long

The prospect of taking an intensive course of drugs can be hard to swallow, but scientists in the US have designed a single pill made from a polymer gel that could potentially deliver an entire treatment in a single dose. This pill could help to end problems of patients failing to finish a course of medication, which can exacerbate illnesses and has contributed to the rise of antibiotic resistance bacteria.

‘Probably one of the biggest health problems in the world … [is] patient compliance – people forgetting to take their drugs,’ says Robert Langer from the Massachusetts Institute of Technology. ‘As a consequence, there are many deaths, enormous amounts of hospitalisations, hundreds of billions of dollars in healthcare costs.’

Langer describes how the Bill and Melinda Gates Foundation, a grant-making organisation run by the former chief executive of Microsoft, Bill Gates, approached his team with concerns that patient compliance was becoming a major problem in developing countries rife with malaria. ‘They [asked]: “Is there a pill you can take, where you could take the entire treatment in a single dose?”’

To address this, Langer and his colleagues had to tackle two key issues. The device has to be able to survive the harsh environment of the stomach slowly releasing its drug payload, but dissolve once it eventually passes through into the intestine. It will also need to be flexible enough to be swallowed and then unfold in the stomach to prevent its expulsion into the intestines.

The team designed a supramolecular elastomer gel by combining poly(acryloyl 6-aminocaproic acid) and poly(methacrylic acid co-ethyl acrylate), a pharmaceutical-grade polymer that resists digestion. The gel can be cut to various sizes and recovers its shape quickly after being stretched to three times its original length.

The elastomer slowly breaks down in the stomach over time

As a proof-of-concept, Langer and his colleagues embedded polycaprolactone (PCL) beads as a dummy slow drug release agent into a ring of the elastomer gel and inserted the device into a standard gelatin capsule. The polymer pill was successfully tested on a pig.

‘You take a capsule, and it can be a capsule that looks like any other capsule, but … it’s got this … elastomer that’s very compressed,’ explains Langer. ‘But when [it] gets into the stomach, the outer part of the shell dissolves, out comes this elastomer and, because it’s so elastic, it opens up into a particular shape.’

In this case, the gel opened up into a 3.2cm ring within the pig’s stomach. The ring remains intact for up to seven days, before the gel component dissolves and the PCL beads can safely travel through the animal’s intestine.

‘I very much like the simple idea of creating an elastic polymer that is gastro-resistant but dissolves at intestinal pH,’ says Gregor Fuhrmann from Imperial College London, UK. ‘The development of this elastic polymer may open the door for future developments in drug delivery.’

It is a hope shared by Langer, who believes the device, when developed further, has great potential. ‘It has the potential to change the way we take drugs,’ comments Langer. ‘It’ll, I hope, save many, many lives.’