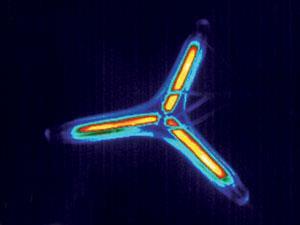 Infrared image of the robot after jumping

It might not be able to leap buildings in a single bound but the latest soft robot to escape George Whitesides’ lab is a jumper rather than a crawler and can jump at least 30 times its body height.1 To reach such heights the robot is powered not by pumping air or liquid into channels in the soft robot’s body, but instead by a method familiar to anyone who drives a car – explosive combustion.

Whitesides’ team at Harvard University, US, has been working on soft robots for some time now, with the aim of creating cheap search and rescue robots that can deal with uneven terrain. Back in 2011, the group showed how a robot made of silicone could be made to crawl and limbo under obstacles by pumping air through channels in the robot, inflating and deflating the robot to create easily controlled motion.2 However, while the robot could be moved in complex ways using simple controls, speed was not one of its selling points.

To speed up the robot, lead author Robert Shepherd, now at Cornell University, took inspiration from his car engine. The explosive expansion of gas in an engine is certainly a quick way of creating mechanical motion, but would it work in a soft silicone robot?

After some burst prototypes, Shepherd replaced the silicone the lab had previously used with another commercially available polymer that had a higher elastic modulus – it was stiffer – and showed that a stoichiometric mix of methane and oxygen, ignited with a spark, could create quick movements without melting the polymer.

‘We found that with the rapid combustion we’re using,’ explains Shepherd ‘the duration of the combustion is so short and the energy released is so minimal that the systems can survive.’

In tests, the robot was able to leap 30cm into the air, where it hit the top of the container the robot was being tested in. ‘Now we need to learn the mechanical design of these systems to make them compatible with running and walking,’ he adds. ‘Jumping was the easiest for us to do; now we need to make it so these things can jump directionally.’

So that’s the next step, making the robot move the way it’s needed, as well as perhaps combining this technology with the slower pneumatic activation so that the controller can chose whether the robot crawls under obstacles or jumps over them.