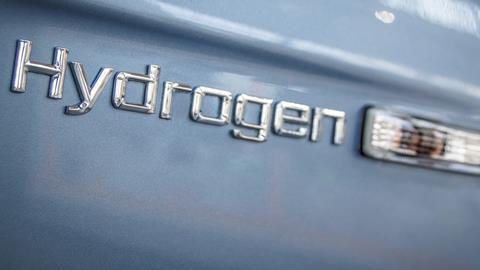 Fuelling the hydrogen economy with straw and old newspapers

Waste materials like straw and old newspapers could one day provide clean energy, thanks to a new process that converts non-food biomass into a stream of pure hydrogen. The researchers behind the work hope that this technology could enable agricultural and urban wastes to contribute to a future hydrogen economy.

As the world attempts to decarbonise its energy supply, hydrogen is expected to play a major role in filling the gap left by traditional fuels. Biomass is one potential renewable source of hydrogen, but turning these materials into hydrogen relies on high temperatures and pressures. Another problem with this approach is that the hydrogen produced from biomass often requires additional downstream purification before it can be used.

Now, a team led by Yang Li of Xi’an Jiaotong University in China has developed a catalytic process that turns biomass materials including straw, sawdust, cardboard and newspapers into a stream of very pure hydrogen. The one-pot, two-step reaction first converts cellulose and hemicellulose into formic acid, by a hydrolysis–oxidation reaction. Without the need for further purification, an iridium catalyst is then used to generate hydrogen gas from the formic acid. Only parts-per-million traces of carbon monoxide and methane that can poison fuel cells were produced, and the team showed that the hydrogen could be fed straight into a proton exchange membrane fuel cell.

‘The major advantage of this system is the starting materials are from renewable non-food related biomass,’ says Li. This use of non-food carbohydrate wastes is carefully designed to avoid future competition between energy carriers and food production. 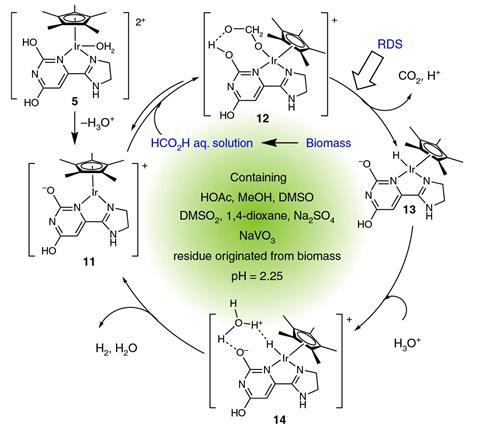 Proposed reaction mechanism for the production of hydrogen from biomass

The dehydrogenation of formic acid takes place at 90°C, and requires a loading of just 69ppm of the iridium catalyst to produce up to a 95% yield of hydrogen in less than 30 minutes. Tom Farmer, an expert in green chemistry based at the University of York, UK, notes that the catalytic conversion of formic acid to hydrogen has further benefits. ‘[Li’s team’s] approach has additional long-term promise as formic acid is likely to become an abundant by-product of several other processes that use biomass feedstocks, and not just from their demonstrated pathway,’ he explains.

In addition to powering sustainable energy systems, Li points out that hydrogen generated from biomass could also be used to make other useful chemicals. Farmer agrees: ‘Bio-based building-block chemicals are inherently highly oxidised, and therefore the use of hydrogen for sustainable reduction is greatly needed for the production of bio-based products,’ he says. ‘One such example would be the promising polar aprotic solvent, Cyrene, produced from the reduction of bio-based levoglucosenone, and used as a replacement for restricted solvents such as [N-methyl-2-pyrrolidone].’

Farmer says the research represents a ‘step-change’ in the formation of clean hydrogen from biomass. ‘This process could prove very influential in supporting a bio-based economy,’ he adds.

Looking to the future Li says that her team wants to improve the catalytic process. They are aiming to further reduce the operating temperature and to move away from pricey noble metal catalysts.