Superbenzenes now do the twist too

Supertwistacene might not win a prize for the longest acene or the most twisted molecule, but it is the first helical graphene nanoribbon whose chiral configuration is stable enough for the enantiomers to be separated.

Acenes, or graphene nanoribbons, are polycyclic aromatic hydrocarbons made up of linearly fused benzene rings. When large substituents are attached to the aromatic rings, it forces the structure to adopt a helical conformation, making a twistacene.

Most twistacenes racemise quickly at room temperatures, often with half-lives of just a few seconds. This means, while these chiral structures do in theory have two enantiomeric forms, they can’t be isolated. Not so in the new supertwistacene, which is made from four fused supberbenzenes (hexabenzocoronene). The two deep red enantiomers are stable even when heated to 200°C for 16 hours and can be separated by preparative chiral high-performance liquid chromatography. 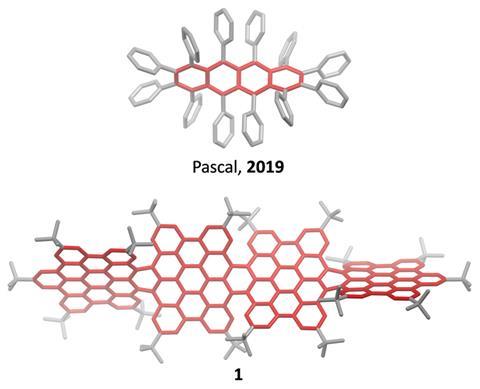 Dodecaphenyltetracene and the new compound

In other twistacenes, the helical shape is created by steric crowding of substituents in the molecule’s periphery. But supertwistacene’s 117° end-to-end twist is established in a dehydrocyclisation that creates the [5]helicene subunits, meaning its configurational stability is locked during synthesis.

However, preparing the 4.3nm-long molecule isn’t that simple. It requires a seven-step synthesis, the last of which only yields 5% of the supertwistacene. Nevertheless, the researchers behind the study hope their work might inspire others to tackle the synthesis of even bigger helical graphene nanoribbons.