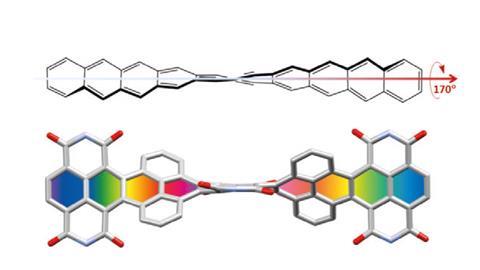 This week, Kat Arney meets a family of elusive, hard-to-make molecules that are sending organic chemists round the twist. 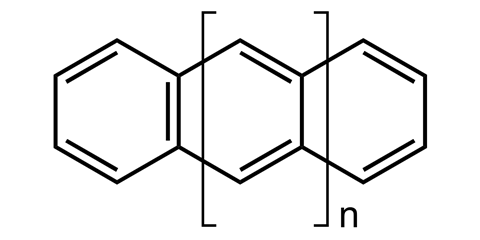 Perhaps the most iconic structure in organic chemistry is a ring made of six carbon atoms joined together in a circle, known as benzene. Now take benzene and add another ring to make naphthalene, then another to make athracene, and another to make tetracene – four rings in a row. Then keep going, all the way up to ten. These rows of rings are known collectively as acenes, while the longer ones are sometimes called graphene nanoribbons. And because of the structural constraints of the carbon bonds where the rings join, these ribbons gently twist along their length, rather than lying dead flat.

Acenes also have some pretty unusual characteristics. Carbon rings contain free electrons that can conduct electricity, so adding more and more rings together leads to some interesting electrical properties. The shapes and structures of different acenes also mean that they absorb and emit light at specific wavelengths and have intriguing optical characteristics. For example, pentacene – which is a chain of five carbon rings – is a semiconductor, and also a lovely shade of purple. 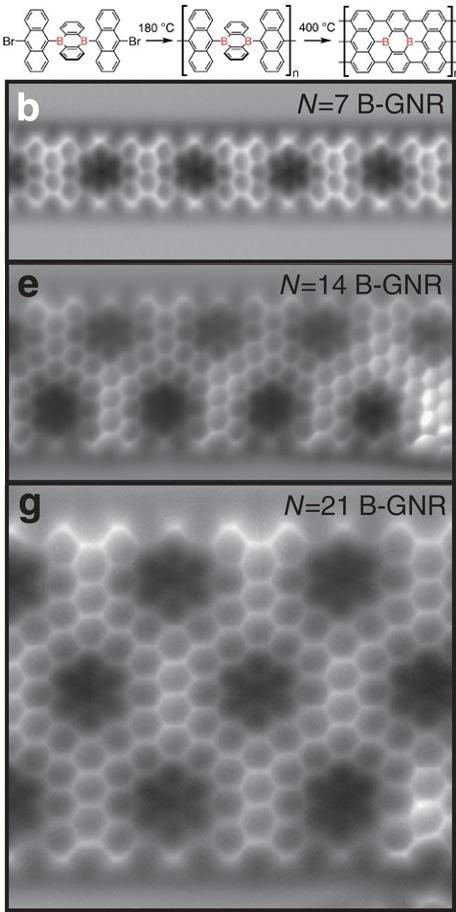 Chemists have long been fascinated by acenes, and many attempts have been made to synthesise longer and longer acene chains dating back to the 1930s. But longer acenes are highly reactive and break down very quickly upon exposure to light and oxygen, so it’s been very tricky to make and study them.

Things get even more interesting if you start adding additional clusters of atoms to the sides of the rings, known as side groups, which stabilise the molecules in certain conformations and also alter their properties even further. Adding big enough clusters to long enough acene chains forces the gentle curve in the ribbon to become more pronounced and locks it in place, creating a molecule known as a ‘twistacene’.

In November 2017, researchers in China and Germany managed to build a molecule called decatwistacene, with ten carbon rings strung through the centre and some pretty chunky side groups. The key to the successful synthesis was a palladium catalyst and some clever chemistry known as Suzuki cross-coupling, a Nobel prize-winning technique that joins organic molecules together. 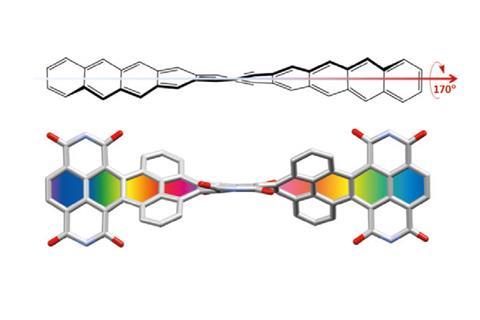 Not only is this the longest twistacene ever made, but it also has a record-breaking angle of twist in the middle. The two ends are off-set by an impressive 170 degrees, compared with the previous record of 144 degrees in a six-ring twistacene. This is an ‘astonishing’ amount of twistiness, according to the research paper describing the molecule, published in the journal Angewandte Chemie.

The extreme twistiness of decatwistacene gives it some unusual properties, as well as making it a nice shade of dark purple. It’s more soluble in organic liquids than regular acenes and is much more stable in the presence of light and oxygen, so can withstand being left out in sunlight for at least two weeks. The twist also affects its electrical properties. The researchers found that decatwistacene is a pretty effective semiconductor, meaning that it could be used in chips and transistors in the same way as the more famous semiconductor silicon.

Decatwistacene also has some interesting optical effects, thanks to a property known as chirality, or handedness, depending on whether the twist is going one way or the other. Many complex organic molecules are effectively left or right-handed with each version having specific physical abilities, such as the way they diffract light.

It’s unsurprising therefore that the most exciting potential applications of decatwistacene are in the field of opto-electronics – electronics based around light, such as sensors or LEDS. Thanks to its stability and intriguing properties, decatwistacene could provide an exciting new twist for future electronic devices.

That was Kat Arney, doing the twist. Next week, a popular kitchen compound with exciting origins.

The whole process of producing this clear crystal is littered with exotic naming. When the unrefined crystals are deposited on the inside of wine barrels as crust they are known as argol or argal, a word that dates back to the thirteenth century. After the crystals are harvested they become known as beeswing, named for the formation of very fine flimsy films of potassium bitartrate on port, resembling near-transparent insect wings.

Brian Clegg gets a rise out of cream of tartare. Until then, get in touch in the usual ways – tweet @chemistryworld or email chemistryworld@rsc.org. I’m Ben Valsler, thanks for joining me.