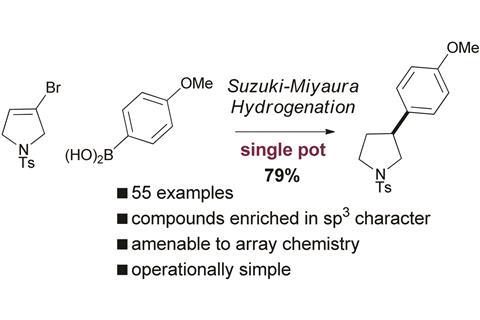 The number of tetrahedral carbon atoms, or how 3D a molecule is, is one factor that determines the success of a molecule in clinical drug trials. Molecules with a high sp3 fraction are in demand, however current methods to make them suffer drawbacks. The Suzuki–Miyaura reaction is common for the cross-coupling of sp2–sp3 systems, but alkyl boron or alkyl halides are prone to β-elimination and other side reactions, producing mixtures of products.

Now, Craig Jamieson and co-workers from the University of Strathclyde and AstraZeneca, UK, have discovered a new way to prepare molecules enriched in 3D character. The strategy involves Suzuki–Miyaura cross-coupling of vinyl halides and vinyl boronate esters followed by reduction of the newly formed olefin, in one pot, creating the desired sp2–sp3 linked system.

So far, Jamieson’s team has used the method to produce high yields of 55 different 3D molecules and demonstrated that it is amenable to the parallel synthesis approach often used for drug discovery.

Thierry Ollevier, an expert in organic synthesis and catalysis from Laval University, Canada, says ‘the main advantages of the method are the practicality of the one pot process and its application in a broad diversity of synthetic targets. The method also elegantly avoids the side reactions known with alternate procedures.’ And Keith Mills, an expert in heterocyclic chemistry who worked at GlaxoSmithKline for 25 years, agrees. ‘This method is particularly useful because it is a (two stage) one pot procedure with consistent yields and therefore very suitable for the synthesis of multiple analogues for pharmaceutical screening,’ he says.

At present, the method’s main limitation is that chiral starting materials, rather than chiral catalysts, are the only way to make chiral products. Jamieson says future work is going to focus on the asymmetric variant, as well as applying the process on a larger scale to extend its applicability to later phases of the discovery process.