The buzz about finding new allotropes

A particle swarm search has thrown up potential new forms of carbon, silicon and germanium 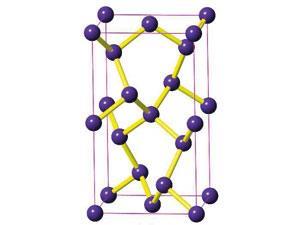 Researchers in China have homed in on possible new allotropes of carbon, silicon and germanium using a particle swarm structure search technique. The discovery could lead to novel materials with as yet unknown properties and potential applications as well as explaining spectroscopic data that has puzzled chemists for decades.

The group 14 elements seem to represent a rich seam of allotropes. For carbon, diamond and graphite are the most well known natural allotropes, but there are also the fullerenes, carbon nanotubes, graphene and other two-dimensional forms. For silicon there are numerous crystal phases as well as the intriguing silicene and similarly for germanium various polymorphs exist. These allotropes are very diverse from diamond anvils to glowing amorphous silicon, from self-healing, hydrophobic graphene sheets to semiconducting germanium. But, might there be yet others?

A team led by Yongjun Tian at Yanshan University and Yanming Ma at Jilin University, has used CALYPSO (Crystal structure AnaLYsis by Particle Swarm Optimization) to find a novel tetragonal allotrope with twelve atoms per unit cell, which exists for C, Si, and Ge. The novel T12 allotrope contains extended helical six-membered rings interconnected by pairs of 5- and 7-membered rings. It should be thermodynamically stable despite its sp3 bonding characteristics, the team says.

The existence of this polymorph in samples of metastable silicon and germanium might explain the peaks in the Raman spectra of those materials that have long puzzled researchers. The T12 polymorph, the researchers add, naturally accounts for the experimental d-spacings and Raman spectra of synthesised metastable Ge and Si-XIII. On the basis of crystal structure prediction calculations undertaken at pressures up to 20 GPa, they reason that it might be possible to obtain this new allotrope experimentally by decompression of high-pressure Si-II or Ge-II phase. Their calculations also ‘reproduced’ known structures of the three group 14 elements studied so vindicating the predictions for the T12 allotrope.

The six-membered rings in the T12 polymorph are unique, the team adds, pointing out that they are dissimilar from such rings found in superhard cold-compressed graphite, for instance, where the rings extended along the wrinkled graphene layers. Additional calculations, however, hint that the T12 structure will itself be superhard.

‘Silicon and germanium are the main elements underlying semiconductor and optoelectronics devices,’ says Paul McMillan of University College London, UK. ‘These theory predictions can provide a new interpretation of previously unexplained Raman spectroscopy and diffraction features observed for these elements and predict similar behaviour for carbon at high pressure.’ He adds: ‘All work like this is remarkably important as we sort out the different possible structural conformations that can be achieved within this apparently simple group of elements.’