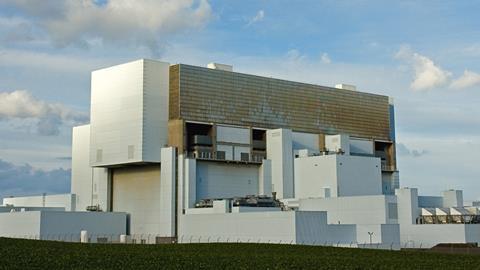 Mini-reactors that have been described as the future of nuclear energy are likely to produce more radioactive waste than existing technologies. The finding comes from researchers who warn that waste management and disposal are being overlooked as policymakers and developers rush through plans for new nuclear infrastructure.

Small modular reactors (SMRs), also known as ‘advanced’ nuclear reactors, have been heavily promoted in recent years. Their smaller size in comparison to traditional reactor designs means that SMRs can be prefabricated in factories and then shipped to different sites for installation. Promoters say that this will make them cheaper and easier to build than current nuclear power plants.

With countries struggling to reduce carbon emissions, many governments hope that SMRs will help them to meet climate targets. Earlier this year, the European Commission proposed adding nuclear energy to its list of ‘green investments’, while the UK government has asked the Office for Nuclear Regulation to begin the approval process for SMRs designed by Rolls Royce. SMRs are currently licensed or being built in Argentina, Canada, China, Russia, South Korea and the US. In May 2020, a floating nuclear power plant in Russia became the first to put SMRs into commercial operation .

But according to Lindsay Krall, a lot of important information is omitted in discussions around SMR waste streams. While working at George Washington University and Stanford University, US, Krall led a team that analysed the waste streams of three different SMR designs.

‘[Designers will] often employ metrics such as mass, which is easy to understand. But it’s not really helpful to those actually practising nuclear waste management – we need to know a lot more about the material, we need to know how much decay heat is being emitted,’ she says. ‘What is the radionuclide composition of the waste? What is the chemical matrix that those radionuclides are bound in? How much low and intermediate-level waste is being produced? And this is especially important: what is the concentration of fissile nuclides in the spent fuel?’

Krall’s project revealed that SMRs could produce up to 30 times the volume of radioactive waste as traditional reactors.

‘When you’re dealing with fission, each fission event generates a neutron, or multiple neutrons, and those neutrons can go forth to propagate the chain reaction, which you’re trying to moderate and control in a reactor,’ says Krall. ‘But the small core inevitably loses a larger proportion of the neutrons that are being generated. So it’s more difficult to sustain a critical chain reaction in an SMR.’ 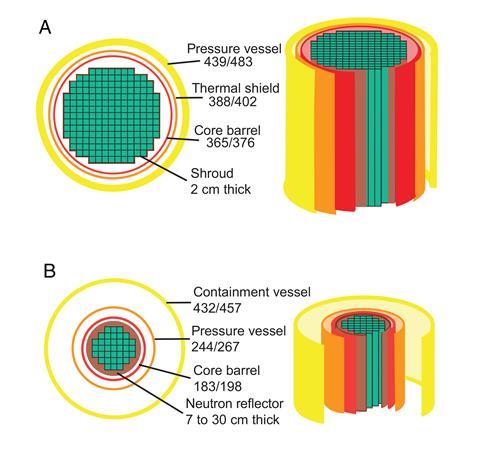 The thermal neutron flux in an SMR (bottom) is 4.5 times higher than in a larger reactor (top). The reactor components are shown with their inner and outer diameters (in cm) and coloured according to their projected waste status, maroon indicating long-lived radioactive waste

To deal with this neutron leakage, a common approach is to add graphite or steel neutron reflectors around the reactor core. But these reflectors also absorb neutrons and become radioactive. Krall notes that SMRs will produce more of these low and intermediate level wastes than traditional reactors. ‘And that waste needs to go to a geologic repository as it consists of a long-lived nuclide, as well as short lived nuclides that can complicate decommissioning of a reactor,’ she says.

SMRs also tend to require uranium fuel that is more enriched with the fissile 235U isotope than the fuel used in regular power plants. ‘Ultimately, the combination of the higher enrichment and lower burn up leaves you with a higher concentration of fissile radionuclides in your spent fuel,’ Krall explains. ‘And that’s something that I think is going to be very expensive to deal with once you get into the design of a spent fuel management system, because you need to put these spent fuels in canisters – and the canisters can be expensive because they’re supposed to last at least 10,000 years.’

As the spent SMR fuel is more radioactive, only small amounts of it can go into each canister to avoid the risk of reaching a critical mass, meaning that ‘many, many, many more canisters’ would be needed, says Krall.

The findings are ‘interesting and compelling’ says Paul Dorfman, an expert on nuclear policy who chairs the Nuclear Consulting Group and is a member of the Sussex Energy Group at the University of Sussex, UK.

He explains that the nuclear industry has spent significant funds developing advanced SMRs amid claims that the technology would help reduce nuclear waste problems. ‘However, in sharp contrast to these claims, this new detailed assessment makes the very strong case that, per kilowatt hour, SMR technology roll-out would significantly increase the volume and fissile, radiological, physical, and chemical properties of nuclear waste generation,’ he says. ‘In other words, compared with existing conventional reactors, SMRs would increase the volume and complexity of the nuclear waste problem.’

‘This is important, since if SMR waste generation is indeed more problematic than conventional reactors, this would have very significant practical and policy implications,’ he adds.

Horst Geckeis, who heads the Institute for Nuclear Waste Disposal at Karlsruhe Institute of Technology, Germany, notes that it is ‘frequently assumed’ that SMR designs would produce less radioactive waste. The work by Krall’s team now provides ‘fundamental information’ to counter this claim, he says, noting that waste produced by SMRs ‘can exceed those produced by currently running light water reactors by far’.

‘[The research by Krall’s team] needs to be taken into account when discussing pros and cons of SMR technologies – and represents an important basis for research and development plans related to radioactive waste management for future reactor concepts,’ adds Geckeis.

Krall says that she has encountered a worrying attitude among developers, policymakers and other researchers that there is no need to address SMR waste streams until they actually start generating waste. ‘I think that’s very unwise, because we can’t assume that we know how to manage these wastes, because they’re so different from what we’re used to dealing with today,’ she says.

‘The regulators, I think, would address the topic, if they were given the funding – but they need that funding from policymakers, and the policymakers are getting information from the developers,’ Krall adds. ‘There’s just a lot of overly optimistic, misleading information that is flying around, and there’s not a general recognition that these reactors are actually going to be worse than what we’re dealing with. There’s hope that they may even contribute to the solution for nuclear waste – but the truth is far from that.’

Correction: On 31 May, the article was updated to clarify Lindsay Krall’s affiliation.